Seguin Inks with the Bruins 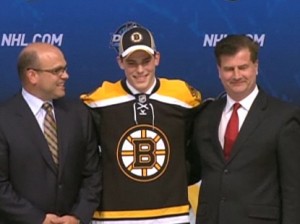 Tyler Seguin will be a good fantasy pickup for any league, but don't expect him to be the top point getter of an already deep rostered Boston Bruin club.

Seguin, the proud prospect of the Ontario Hockey League is expected to make the NHL entry level maximum of $900,000 with a additional bonuses based on production that could bring him in the $4 million range, mimicking that of number 1 overall pick Taylor Hall of the Edmonton Oilers.

With all the sporting news of NFL rookies not signing and holding out for big contracts, or other players signing big contracts but not passing fitness tests, it is good to see the NHL have their ducks in a row in regards to rookies. Seguin and all other rookies will have to earn their place on the team as well as the team’s respect.

Seguin will be under a microscope with the hard to please Bruins fans, but expect him to excel at the role he is given, however do not expect him to match numbers like New York Islander’s rookie last year John Tavares. Tavares posted 54 points on a team that asked him to carry the workload, while Seguin will be coming into a more support roll at the second or possibly third line. It would be surprising if Seguin can put up 54 points in his rookie season, but it won’t be surprising for him to at least hit the 40 point mark.