Don't Miss
Home / News / And Then There Were Four

And Then There Were Four 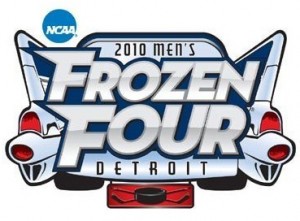 The Frozen Four is here and upon us. Fans will enter the gates of Ford Field this Thursday and Saturday for two semifinal and the national championship. I will be one of the 37,000+ fans in attendance for both games Friday and the championship Saturday. I’m hoping to see three exciting games between four deserving teams. Here’s a preview of each team and what to expect at Ford Field.

We saw Duke having their One Shining Moment on Monday when they won the men’s basketball Frozen Four. Which team will have theirs come Saturday night?

Why they will win it: This team has been on a mission for the last 360+ days. What team wouldn’t after what transpired against Boston University.

Why they won’t win it: Just like how they could win it, they could simply try too hard and press too much if it’s less than 5 minutes and they are trailing by one.

The Redhawks are a team that’s been on my radar all season. I’ve watched them play in the CCHA semifinal and consolation game and they looked like two different teams. The defeat against Michigan only a few miles away from Ford Field was one of their worse performances all season. But it was the Redhawks who won the more important game against the Wolverines at the Midwest Regional in Fort Wayne, Ind. They are a strong team with plenty of solid players on both sides of the puck. And in goal, they have two equally competent goalies who each had what it takes to win the championship. On offense they don’t have one go-to player or line, but a corps of players who each can light the lamp. The only problem is if they end up in a bind, who can you count on to create scoring opportunities?

Why they will win it: They led hockey East in team defense. They can slow it down and have a low scoring game or rev it up and have a high scoring shootout.

Why they won’t win it:The high scoring shootouts isn’t what you want in the national semifinal and national championship. If Miami has a two or more goal lead after two periods Thursday night, I don’t know if a team that allowed six to Miami and seven to Yale in postseason play can come back from that.

The Eagles have not experienced a loss since February 19. During that stretch, they have gone 10-0-1. In addition, they have trailed for a grand total of 55 seconds. Coach Jerry York is one of the legends of the college game, and he has been to the Frozen Four in four of the last five seasons. He will have his troops ready and prepared for Miami come 8:00 Thursday night. Similar to Wisconsin this year, the Eagles should adjust to the massive environment of Ford Field faster than RIT and Miami, as they played at Fenway Park in January.Look for Boston College to play a puck movement style of hockey, as York doesn’t like to see the puck on a players stick for too long. Keeping the puck moving and looking for the open man is what will be key to lighting the lamp.

Why they will win it:Experienced team of mostly upperclassmen. They are also a team with a powerful offense from the forwards and defensemen and the team has lots of tournament experience.

Why they won’t win it:They don’t have the solid goaltending you’d like to have this late in the season. RIT had no problem standing up and punching a WCHA opponent, like what they did to Denver in the regional.

The 2006 and 2010 seasons have very similar comparisons for the Wisconsin Badgers. 2006 was the last time they won a national championship and they are two wins away from the same feat this weekend. 2006 was also when the Badgers played in a football stadium and they did so in February. Coach Mike Eaves has to take a K.I.S.S. approach with his team and that is to keep it simple and do what they have done all season up to this point. At this point in the season, coaches have to be careful and not over coach on the bench. The players know the systems and assignments and they have stick to the game plan and make adjustments only when necessary. The Badgers have to focus on things they can control, such as having a strong presence in the slot on both sides of the ice. For Wisconsin to advance and move on, goalie Scott Gudmanson needs to have a solid game and knock away any loose pucks near the net.

Why they will win it: They have nothing to lose. No one outside their dressing room thought they would be here. They proved they can play with the big boys after upsets of Denver and New Hampshire.

Why they won’t win it: They are a #4 seed and would have to defeat three #1 seeds in four games up capture the championship. That’s a tough task for any team.

RIT is the team that was supposed to be playing golf this weekend instead of strapping the pads at Ford Field. Now that they are here, they have to focus on the task at hand and not get too happy just by being here. You’ll see this with Cinderella teams that advance in the NCAA hockey or basketball tournaments: a team that was still on such a high when winning the regional that by the time the Final/Frozen Four rolls around they aren’t ready to play because they “were just happy to be here”. When doing my research, this same topic was covered when RIT coach Wayne Wilson sought advice from Bemidji State bench boss Tom Serratore about “the small school dealing with big time distractions that come with advancing to the Frozen Four”. Serratore sent Wilson an email that said  “By the time we got to D.C., the game might have been secondary from the experience we had from winning [the regionals] .” Wilson posted that warning in the RIT locker room last week, and that’s enough bulletin board material to drive it home to his players. 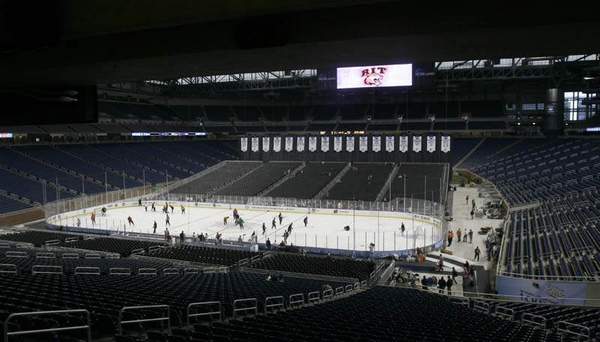 The rink setup at Ford Field for the Frozen Four

The first semifinal could be the more interesting match up. RIT has nothing to lose while Wisconsin is a favorite to win it all. The Tigers could be dangerous for the Badgers simply because they have defeated top teams just two weekends ago. Similar to Butler in the NCAA basketball tournament, the small school knows how to play with the big boys and they aren’t afraid to crash the party. The Tigers have won 12 straight games and have allowed 14 goals in its last 11 games. College hockey media guides normally list the NHL teams that have draft rights to its players. RIT’s media guide list players favorite teams because none are draft picks of NHL franchises. Compare that to 11 picks of the Badgers including Hobey Baker Award finalist Blake Geoffrion could be too much for the Tigers to tame. I like RIT to keep it close till midway through the third period before Wisconsin scores a couple goals to advance to the championship.

This could be the best game of the weekend. Boston College and Miami are two teams who know how to get to this point in the season and how to play in pressure situations. Like I have said all season, Miami is a team on a mission ever since they walked off the ice at the Verizon Center in Washington D.C. last April. Compare that with the tragic death of manager Brendan Burke, Miami has a few things on their mind to play this championship for. Boston College could be the team that can spoil the party but don’t expect that to happen. If the Redhawks don’t come out and get a 2-3 goal lead after 40 minutes then they could be in trouble. I don’t foresee another performance like they had in regulation against Michigan, but rather a team that’s on a mission and nothing will derail that.

Check back before Saturday’s game for recaps and photos of the action at Ford Field, as well as a preview and picks of Saturday’s national championship.