Editor’s Note: Part 1 of the College Hockey Preview can be found here.

Boston University won the National Championship in one of the greatest hockey games you will ever see. With an extra-attacker on the ice and trailing Miami 3-1, the Terriers scored twice in the final minute and took the title 11:47 in the first OT period to win the title for the first time since 1995. In one of the toughest conferences in the nation, the Terriers received six of the 10 first-place votes in the coaches poll. In addition to the Terriers, look for UMass-Lowell and  Boston College attempt to dethrone Boston U with Vermont leading the rest of the teams in the conference.

CCHA: Both Coaches and Media Hail to the Victors in Michigan 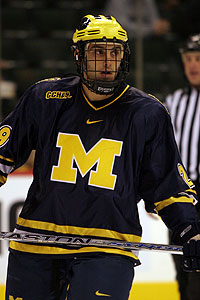 Michigan forward Louie Caporusso hopes to lead the Wolverines to the Frozen Four at Ford Field in April.

For the first time in four years, both the coaches and media agree on the same team in the preseason poll. The Wolverines are always a favorite in the conference, as they have qualified for the NCAA Tournament 19 years in a row. That is quite an astonishing streak considering the amount of turnover due to graduations and players turning professional. Like Michigan State in basketball, Michigan hockey has the chance to play for a national title in its own backyard as it’s only 44 miles from Yost Ice Arena to Ford Field. Look for Miami and Notre Dame to challenge Michigan at the top of the standings, with Miami taking the tournament championship.

WCHA: Pioneers are Head of the Class

Denver finished last season with a bad taste in its mouth. One of the top teams in the nation, they lost to #5 seed Minnesota- Duluth in the WCHA Championship game. The following weekend they lost in the first round to eventual runners-up Miami. The Pioneers look to bounce back in what was a down year for the league as only three teams qualified for the tournament. A sharp contrast compared to 2005 when five teams qualified and all Frozen Four participants came from the WCHA. There’s several teams that can challenge the Pioneers, including Minnesota, North Dakota, and Wisconsin. Look for the Badgers to take the conference title this season.