The NHL started its season last week. This week, the collegians begin the 2009-10 season as 58 teams will try to achieve the same goal: compete for a National Championship at the 2009 Men’s Frozen Four at Ford Field in Detroit. There are several teams that are always in contention for the title. Teams such as Minnesota, Michigan, Miami University, and defending champion Boston University almost always qualify for the 16-team NCAA Tournament like basketball counterparts Duke, Michigan State, UCLA, Kansas and North Carolina. Here’s a preview of what to expect in each of the three small conferences. Check back tomorrow for previews of the three big conferences: CCHA, WCHA, and Hockey East

ECAC: Bulldogs are Favored in Both Polls

Last season, Yale won both the regular-season and conference championships. They earned a #2 seed in the East Regional before losing in the first round to Vermont. Both the coaches and media are picking the Bulldogs to repeat. They return virtually all of their offense as each of their top-ten scorers return for this season. While Yale is the favorite, don’t sleep on contenders Cornell and Princeton.

Air Force has qualified for the NCAA Tournament each of the last three seasons. Last season, they tied for the regular-season championship with RIT, but it was the Falcons who not only won the Atlantic Hockey Tournament, but upset #4 seed Michigan in the first round of the NCAA Tournament. The Falcons are picked to win the conference again this season, but expect the Tigers and Mercyhurst Lakers to take a shot at knocking down the Falcons. 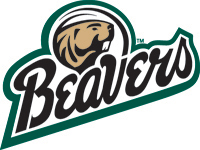 Bemidji State will have to go through Niagra if they want to achieve the same magic as last season.

In the final season of College America, Bemidji State and Niagra are head of the class while Robert Morris and Alabama- Huntsville follow behind. With four teams in the conference, it feels like a band going out on tour one last time before disbanding. The Beavers are going to the WCHA next season, while Robert Morris and Niagra are moving to Atlantic Hockey. The Chargers are still looking for a conference after being denied by the CCHA over the summer. The Beavers were the Cinderella team last season, advancing to the Frozen Four in Washington D.C. as a #4 seed. Only one team will come out of this conference, will the Beavers qualify again? Will the Purple Eagles want some of the Cinderella magic the Beavers had this season? Expect Bemidji State to take the conference title again.