After backing into the 8th seed in the Eastern Conference last season when they lost 10 of its last 15 games, Montreal GM Bob Gainey had to make changes. And changes he made as 11 players departed including Saku Koivu, Alex Tanguay and Robert Lang. Gainey did add an all-new first line with center Scott Gomez and wingers Mike Cammalleri and Brian Gionta. It will be interesting to see how can Cammalleri produce an a more pressure-packed environment and without Jerome Iginla.

The main strength the Gomez-Cammalleri–Giontaline line will offer is speed. They have a lot of skill and talent, but with that they are sacrificing toughness and physicality. The depth of the forwards more top-heavy than other teams. After the first line, players such as Andrei Kostitsyn, Tomas Plekanec, and Travis Moen need to increase their scoring from last season to help compensate the offense that departed.

Another strength the Canadiens posses is defenseman Andrei Markov. Markov was second on the team in points with 64 last season.  Markov will also be looked upon to lead the power play and penalty kill units, which ranked 13th and 11th respectively in the league last season. Other defensemen that can be expected to contribute this season include Hal Gill and rookies Yannick Weber and P.K. Subban. 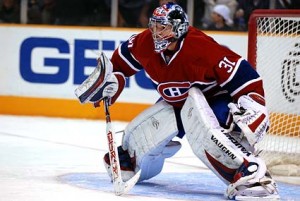 Which Carey Price will show up this season?

One big question mark the Canadiens will have is in goal. They have two young, still developing goaltenders in Carey Price and Jaroslav Halak. Expectations will be high for Price and deservingly so. After a stellar rookie season in 2007-08, Price struggled down the stretch and recorded only 1 shutout all season long in 2008-09. They did make a goaltending coach change during the off-season, and we can only hope new goaltending coach Pierre Grolux can teach Price to cut down shooting angles and allow less soft goals this season.

Overall, I can expect Montreal to still be a few steps behind Boston in the division. The Canadiens will have a shot to make the playoffs, but that’s not good enough to the Montreal fanbase. If they play to their potential, they can finish anywhere between fourth-sixth in the conference. But if they stumble down the stretch like they did last season, expect them to miss the playoffs or suffer another sweep at the hands of the Eastern Conference powers: Washington, Boston, or Pittsburgh.