Yesterday’s post featured the best available unrestricted free agent players on the market. Today’s post will feature six players who also don’t have a team to report to when NHL franchises begin training camp next month.

Former Selke Trophy winner Peca has fallen in recent years. His goal totals the last four seasons combined totaled the number of goals he scored the last time he scored over 20 goals in 2001-02. Another victim of the injury bug, Peca could latch onto a young team as a face-off specialist and fore-checker. 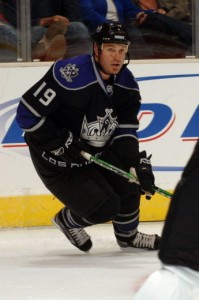 As someone who should be in the prime of their career, Calder hasen’t scored more than 10 goals in a season since 2006. Also not working in his favor is that he has only finished on the good side of plus-minus twice in his career (One time being in 2007 when he was +6 in 19 games with Detroit after the 2007 trade deadline). He’s a player who has to take less money if he wants to stay in the NHL.

Satan proved that playing on the same line as Crosby and Malkin doesn’t lead to increased stats. He had his worse season since 1995-96 with Edmonton. He scored more points in 2008 with the New York Islanders than last season with the Stanley Cup champion Pittsburgh Penguins. But at least he got a ring out of the one-year deal, unlike Marian Hossa.

Unlike most players on this list who are on the downside of their careers, Siedenberg is only 28 years old. He has tremendous upside and can be a fourth to fifth defenseman on a good team. Last season was his first season in the league full-time and showed that he deserves to be  in the starting lineup every night. Watch for his name on the German Olympic team when the Olympics roll around this winter.

Similiar to Chris Chelios and Mathieu Schneider, Sydor is a 37-year-old Stanley Cup champion who can become a second to third line defenseman. He wouldn’t be someone who you’d put on the first line, but his experience can be useful in special teams situations and can tutor younger defensemen.

Look for Kevin Weekes to land in the Western Conference this season.

Martin Brodeur was injured most of the season with an elbow injury. This allowed Weekes and Scott Clemmensen to share goaltending duties for the Devils. While Clemmensen followed down the road of NFL quarterback Matt Cassel in becoming a backup-that-played-so-well-he-deserved-to-become-a-starter when he left to sign with Florida, Weekes was the odd man out. Weekes has started before in his career, and can show that he can become a #1 of a goalie falls to injury. He can come cheap and provides experience. He’s spent 11 of his 13 seasons in the league in the Eastern Conference, so expect him to play in the Western Conference.