TSN is reporting that forward Nikolai Zherdev has signed with a team in the Russian KHL league. 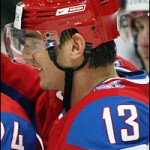 Could Zherdev's career be tied into the folkloric belief of the unlucky #13?

The 24 year old started with the Columbus Blue Jackets, traded to the New York Rangers, and eventually ended up on the short end of the stick as the New York Rangers exercised their walk-away option from an arbitration award. The forward was awarded a 1 year $3.9m contract.

Zherdev posted 23 goals and 35 assists for 58 points in 82 games last year with the Rangers.

With the salary cap what is is today, and most teams already made their off season acquisitions, it was only a matter of time before the young forward was to sign in another league.

Zherdev has had previous stints in the Russian league to later play with an NHL team in the same season. One can only hope that he returns sometime within this upcoming season as his talent for the game could help any team become better.