Williams back in Hockeytown 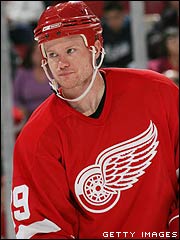 The Detroit Red Wings announced today that they have signed right-wing Jason Williams to a one-year, $1.5 million contract.

Williams is familiar with the Red Wing, having spent seven years in the organization playing for their minor league affiliates or the Red Wings themselves before being dealt to the Chicago Blackhawks at the trade deadline in 2007. Williams signed with the Atlanta Thrashers in the summer of 2008 as an unrestricted free agent where he played 41 games before being dealt to the Columbus Blue Jackets. Between the two teams, Williams had 19 goals and 47 points.

“He’s somebody we’ve had before,” said Detroit vice president and general manager Ken Holland. “We know the player. We know the person. We lost 90 goals (to free agency) and we’re looking to replace some of that. We’re hoping Jason can get 15-20 goals. Maybe he can get more.”

The Red Wings expect Williams to help fill the void left by the departure of free agent Mikael Samuelsson, a right-handed shot who could play the point on the power play.

Williams won a Stanley Cup with Detroit in 2001-2002 where he played in 9 playoff games.