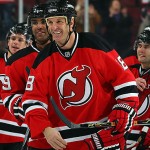 The New Jersey Devils have signed veteran winger Brendan Shanahan to a one year deal. While several NHL teams have made a push for Shanahan this summer, he ultimately decided to return to the team which drafted him in 1987.The terms of the contract have not been disclosed.

After playing four seasons with the Devils from 1987-1991, Shanahan spent time with the Blues, Whalers, Red Wings and Rangers, before returning to New Jersey in January. He has 656 goals and 698 assists for 1354 points in 1524 NHL games. Shanahan is an eight time NHL All Star and has represented Team Canada twice in the Olympics.