Don't Miss
Home / Rumors / Should He Stay or Should He Go?

Should He Stay or Should He Go?

Newly elected NHL Hall-of-Famer Steve Yzerman has served as Vice President/Alternate Governor in the Detroit Red Wings front office since retiring in 2006. Hockey fans know that The Captain deserves to have a shot at becoming a General Manager of a NHL club in the future. He is even having his first chance of making real decisions over a hockey team as he is currently serving as Executive Director of the 2010 Canadian Olympic team.

What caught my attention was a recent blog posted here that brought to my attention that Yzerman was hoping to be considered for the Chicago Blackhawks GM position, which eventually went to Stan Bowman, son of former Red Wings coach Scotty Bowman. 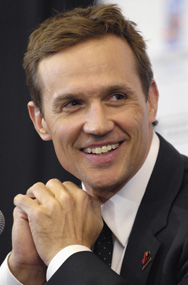 Who would be the first team to give him a shot as General Manager?

Now, depending on how he organizes the Olympic team will determine how soon and who will want him as a General Manager. He already has been groomed in one of the best organizations in sports, but he is miles away from replacing Ken Holland as General Manager. The MLive.com blog also reiterated that Assistant GM Jim Nill’s contract is up in two years, and the Red Wings will be sure to evaluate their front office at that time.

But it got me thinking, if Yzerman wants to run his own team, how would Detroit fans react? Me personally, I’d be happy to see him with any team outside the Central Division and preferibly the Western Confernece. Let him turn around the New York Islanders. Let him run the Phoenix Hamilton Coyotes.

He’s gonna be facing a lot of pressure in the fall when he has to put together the Canadian Olympic team. He win’s a Gold Medal in Vancouver next February, then I think he’s qualified enough to run a NHL club.