Quinn Hughes to Return to the University of Michigan 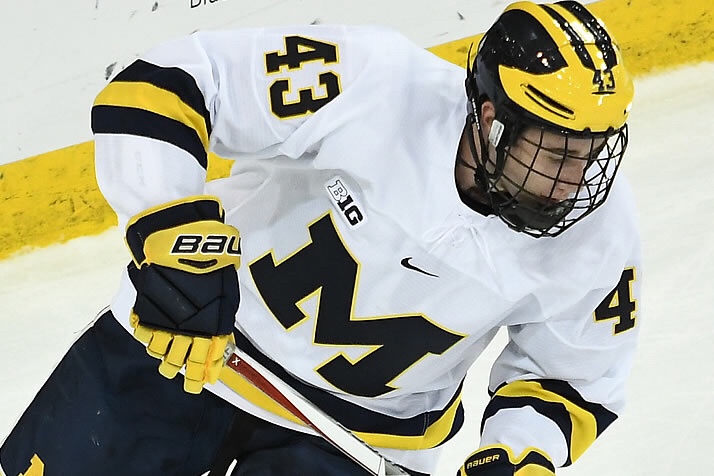 After the 2018 NHL Draft, it would only be right for Vancouver Canucks fans to be excited about Quinn Hughes lacing up the skates this fall with 2017 first-round pick Elias Pettersson. Unfortunately, the duo taking the ice together will have to wait until at least next Spring after Hughes announced he would be returning for another season at the University of Michigan.

Hughes was drafted by the Canucks with the seventh overall pick in the 2018 draft, and his work at Michigan as a freshman at Michigan definitely helped him to earn that spot. Last season, he picked up five goals and 24 assists among 29 points to lead all Big Ten freshman defenseman. His elite level play also helped Michigan to reach the Frozen Four, where they lost to Notre Dame.

“My heart’s obviously still at Michigan,” Hughes told MGoBlue.com. “I was heartbroken when we lost to Notre Dame in the Frozen Four last year. I’ve never really been on a team that cares so much about each other, and I think that’s a big reason why I’m coming back, because I love my teammates.”

The return to college hockey will offer several benefits for Hughes, one of which will be the time and opportunity to continue to add size to his frame. At 5-foot-10 and 175 pounds, Hughes will see plenty of time in the weight room due to a 30-40 game college schedule. The opportunity for physical development will be much greater at the University of Michigan versus playing a full schedule at the junior, AHL, or NHL level.

Hughes will also have other tremendous opportunities for development including the upcoming World Juniors and another crack at winning a national championship with the Wolverines.

“I think we have a good team this upcoming year, and I believe in the group,” Hughes said. “For me, I have a lot of goals in my mind. I want to be the best player in college hockey, and I want to win the national championship. I think we can do it with the group and the coaching staff we have, and we believe in each other.

“I want to win. When I look back at my season last year, I had a great year. But I didn’t win a national championship. That’s my goal next year, and anything less than that would be disappointing.”

From the Canucks perspective, the management team has been nothing but encouraging of Hughes’ decision to return to Michigan.

“We are in full support of Quinn’s decision to continue his university career as he further develops as a hockey player and student,” Canucks GM Jim Benning said in a statement. “He now has an opportunity to be a leader at Michigan and represent Team USA at the 2019 World Junior Championship in Vancouver. These are once-in-a-lifetime experiences that will only benefit Quinn’s future career.”

Quinn Hughes and the Wolverines will kick off their season on October 6th at Yost Ice Arena where they will host Vermont.