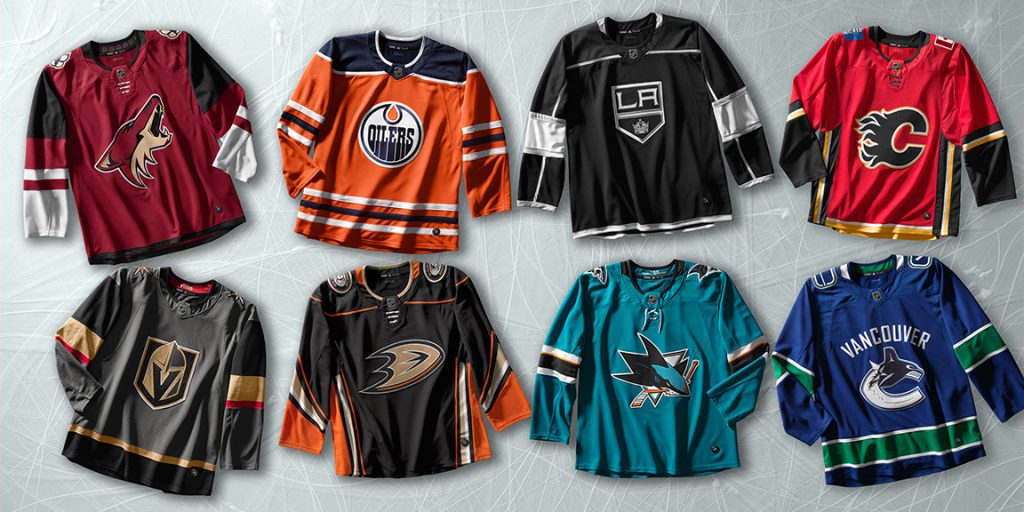 As we inch toward the start of the 2017-18 NHL hockey season, we are also getting closer and closer to the release date of the all-new adidas jerseys which will be worn this season. Fortunately, we will not have to wait too much longer as the adizero Authentic Pro jerseys officially went on sale at NHL Team Shops September 14 and will be available online starting on September 22nd.

For a full scope of details on the new jerseys, check out the press release below:

The National Hockey League (NHL®) and adidas announced earlier this week the new adidas adizero Authentic Pro jerseys for all 31 teams will be available for sale at retail locations throughout North America on September 22, 2017.

At the forefront of innovation, design and craftsmanship, the new adidas adizero Authentic Pro jersey takes the hockey jersey silhouette to the next level by redefining fit, feel and lightweight construction. Featuring adizero lightweight cresting and twill numbers, adidas Clima® technology and Aeroknit detailing, and the platinum NHL shield and interior fight strap, the adidas adizero Authentic Pro jerseys will be available for $180 USD | $200 CAD each at shop.nhl.com and adidas.com on September 22 and will be exclusively available at NHL Team Shops starting September 15.

The new adidas adizero Authentic NHL jerseys will make their on-ice debut with the start of the 2017-18 NHL regular season on October 4, 2017. For more information and images of the new adidas adizero Authentic Pro jerseys, please visit http://news.adidas.com/US and  join the conversation on Twitter and Instagram via @adidasHockey, @adidasca, @NHL and https://www.facebook.com/adidas/ #teamadidas.

adidas is a global designer and developer of athletic and lifestyle footwear, apparel and accessories with the mission to be the best sports brand in the world. As an innovation and design leader, adidas engineers the best in high-performance products to make athletes better, faster and stronger and creates a range of classic and fresh lifestyle and high-fashion lines. adidas has marketing agreements with the National Hockey League (NHL), National Basketball Association (NBA), National Football League (NFL), Major League Baseball (MLB), Major League Soccer (MLS) and Major League Lacrosse (MLL).

The National Hockey League (NHL®), founded in 1917, is celebrating its Centennial anniversary in 2017. The year-long celebration pays tribute to 100 years of NHL hockey by honoring the past, commemorating the present, and celebrating its future. In 2017 the League is also celebrating 125 years of the most revered trophy in professional sports – the Stanley Cup®. Comprised of 31 Member Clubs, the NHL is represented by players from more than 20 countries across team rosters. Each year, the NHL entertains hundreds of millions of fans around the world. The League broadcasts games in more than 160 countries and territories through its rightsholders including NBC/NBCSN in the U.S., Sportsnet and TVA in Canada, and Viasat in the Nordic Region. The NHL reaches fans worldwide with games available online in every country including via its live and on-demand streaming service NHL.TV™. Fans are engaged across the League’s digital assets on mobile devices via the free NHL® App; across nine social media platforms; on SiriusXM NHL Network Radio™, and on NHL.com, available in eight languages and featuring an enhanced statistics platform powered by SAP, providing the definitive destination for hockey analytics. The NHL is committed to giving back to the community through programs including: Hockey is for Everyone™ which supports nonprofit youth hockey organizations across North America; Hockey Fights Cancer™ which raises money and awareness for hockey’s most important fight; NHL Green™ which is committed to the pursuit of sustainable business practices; and a partnership with the You Can Play Project, which is committed to supporting the LGBT community and fighting homophobia in sports. For more information, visit NHL.com.