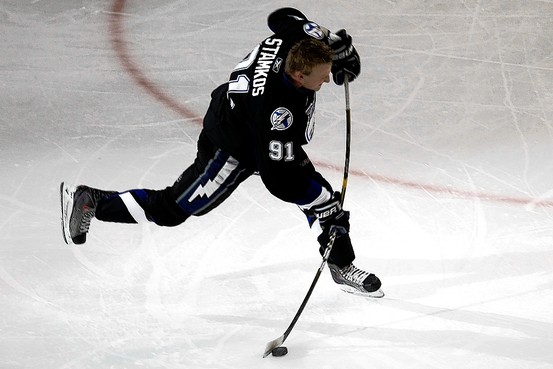 When Michael Rainisch was a kid playing pick-up hockey with his friends, picking out a new hockey stick was simple because you had two choices: righty or lefty.

Fast forward 30-something years to when Rainisch had to help his son pick out a new stick and he learned the hard way that a lot had changed. Wooden sticks were a thing of the past. Now, players can choose from a number of brands, curves, construction materials and flex. The options are seemingly endless, especially to someone who hasn’t bought a hockey stick in 30 years.

“I walked into the pro shop at the rink and didn’t know where to start—there were hundreds of options,” said Rainisch. “I didn’t know what I was looking for, but we got my son a stick for $199 because that’s what the guy at the pro shop told us to buy.”

Advancements in hockey stick technology over the past 10 to 15 years have increasingly pushed prices higher. Youth and Junior sticks range from about $50 to $199, Intermediate sticks top out around $269, and adult hockey sticks are hovering at just about the $300 mark. For Rainisch, the steep price tag was a concern, but so was his son’s performance using the high-end stick.

“Every time he took a shot, he’d fly into the boards,” Rainisch said of his son.

He couldn’t understand why until he began researching hockey sticks and figured out the cause: the stick’s flex.

In fancy scientific terms, a hockey stick’s flex rating refers to the pounds of force needed to make a hockey stick shaft bend, or “flex,” one inch. Hockey players usually refer to that as how “whippy” a stick is. The lower the flex rating, the easier it is to flex the stick and vice versa.

So why is flex important?

When a player shoots the puck, the stick essentially acts as a spring. When the stick unbends and snaps back into place, it accelerates the puck toward the target. If a player’s flex is too high, he or she won’t be able to bend the stick properly to generate that storage of energy. Instead, they might fling themselves into the nearby boards—like Rainisch’s son.

After conducting research and determining his son needed a lower flex stick, he ran into another problem. None of the manufacturers made sticks lower than a 40 flex.

“I said ‘there’s got to be a better way’ and began doing more research into flex, carbon fibers and weaves,” said Rainisch. “I decided to come up with something more appropriate for this age group of players between 6 and 13.

“A lot of these kids see someone using a stick, whether it’s Kane or Toews or Ovechkin, and they spend a lot of money (on the same brand stick) but don’t get the most out of it,” said Rainisch. “And these things are not cheap. So I would go around and say to kids ‘what flex do you use? what does flex mean?’ and they didn’t know.”

Rainisch knew, and he knew that putting sticks with the proper flex in the hands of these players could improve their game and the fun aspect of playing hockey.

“You can size a kid for skates, but you can’t size a kid for a stick—and it’s one of the most crucial tools of the game. We decided to step in and do something.”

“Quality of the stick is very important, and so is a good price point,” said Rainisch. “This is an expensive sport and we needed to get the starter stick—the 20 flex—into kids’ hands for less than 90 bucks.”

The response was overwhelmingly positive, and Snipe Show Hockey Sticks was born.

The description on the company’s website for each stick gives insights into who would benefit best from each flex. For instance, the Lamplighter says it is best suited for lighter players who are 50 pounds or less. The website also features an entire section dedicated to educating players (and 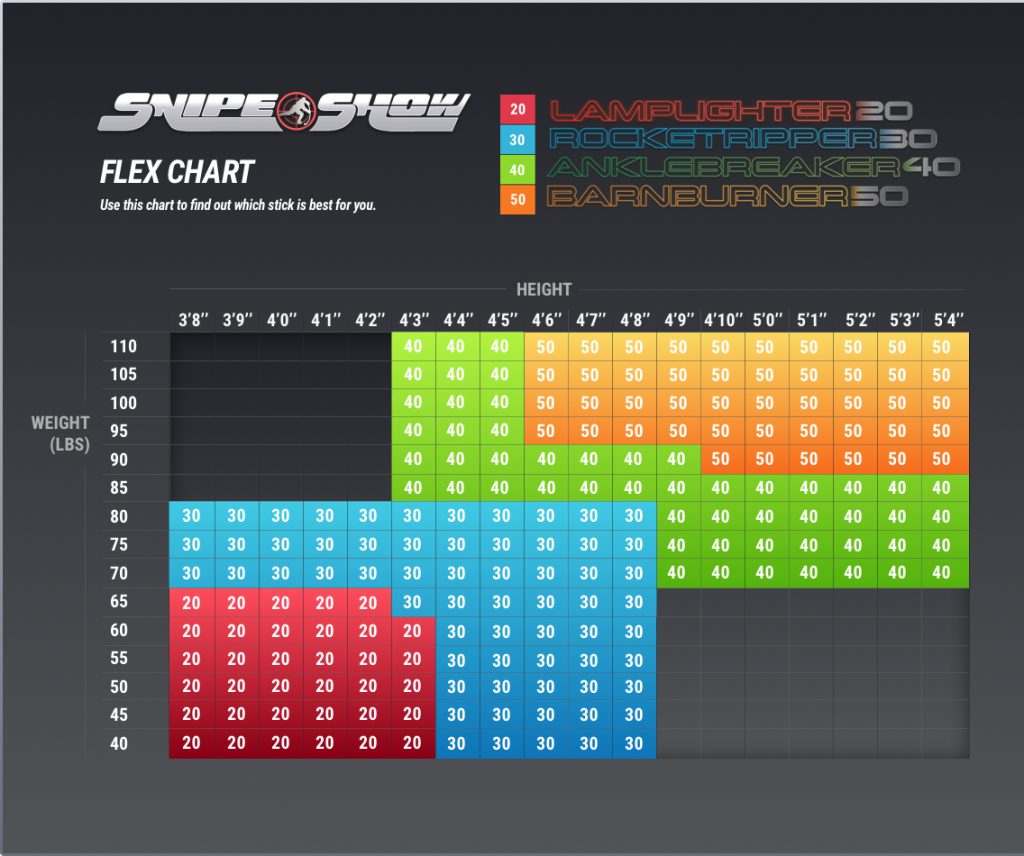 their parents) on the importance of flex in a hockey stick.

“We were surprised that kids who played at a high level didn’t understand the dynamics or the physics of the stick,” said Rainisch. “So another part of it is education, and we want to educate the kids and the parents so when they go in to buy something they understand what they are buying and why they are buying it.”

To enhance quality and durability, Snipe Show uses a higher quality carbon fiber weave in the shafts of its hockey sticks than other low-flex hockey stick manufacturers. Where most manufacturers use a unidirectional core, which is also more expensive, Snipe Show uses a 12k carbon fiber weave in its 30 and 40-flex sticks, and an 18k weave in its 50-flex option. Lamplighter, the company’s 20-flex option, uses a unidirectional core “because there’s no way to put a 12k or 18k weave on the shaft and keep its flexibility,” said Rainisch. “Most kids that small won’t snap the stick,” he concluded. Each stick also comes with a 30-day warranty.

In addition to producing a quality product at an affordable price point, Rainisch and Rozenblat also sought to create something flashy that kids would want to use. They spoke to a number of children who played at nearby rinks to get feedback on different designs and product names.

“Initially we came up with some graphics we thought of on our own, trying to go old school,” said Rainisch, who mentioned some of those initial designs had arcade-type fonts with bright neon colors on the sticks. But when a friend who played saw the sticks, he said his teammates would laugh him out of the locker room.

“He told me, ‘no respectable player will play with that,’” said Rainisch.

This led them to seek out a graphic designer. Although knowing nothing about hockey, the designer “came back with these unbelievable graphics, and that’s how we got the designs,” Rainisch said.

“We wanted to make the stick appealing to all age groups. If we made a stick that the young kids like and the older kids thought it was lame, that’s it—were done,” he said. “So we made it appealing to older kids too, and the younger kids will gravitate toward it when they see the better players using it.”

After launching the company in January, Rainisch and Rozenblat continue to look at new ways to get their products out to hockey’s youth.

“I was in a pro shop telling the guys about our sticks and they said they had never heard of a 20-flex stick,” said Rozenblat. “We’re the only ones out there doing it.”

For Rainisch, his “pet project” has turned into a chance to change the game for the better.

“This was a hobby to see if I could get something going and make a difference in the hockey community and to educate kids and parents about the appropriate equipment,” he said. “Kids are wondering why their form is terrible or they can’t lift the puck. Maybe they are using the wrong stick.”