Golf and Hockey A Match Made in Heaven at Canadian Open

It’s no secret that a lot of hockey players play golf during the summer. I’ve even encountered a foursome of Detroit Red Wings players finishing up their round three years ago when I was attending a wedding at a local golf course. 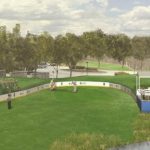 This week at the PGA Tour’s Canadian Open, organizers constructed a super-sized hockey rink on the Par-3 7th hole at Glen Abbey Golf Club where the tournament is being contested.

An excerpt from Golf Canada:

To help celebrate Canada’s 150th anniversary, Golf Canada and RBC have announced the launch of The Rink – a fan experience taking place during the 2017 RBC Canadian Open that will combine Canada’s most popular past-times, golf and hockey.

During championship week, July 24-30, the par-3 7th hole at Glen Abbey Golf Club in Oakville, Ont., will transform into a rink-styled fan experience, complete with hockey boards, a Zamboni, as well as the addition of new rink-side bleachers and viewing decks.

“We’re very excited to bring The Rink to life,” said RBC Canadian Open Tournament Director Brent McLaughlin. “We wanted to create an experience that oozed Canadiana. We know Canadians love hockey, and of course they love golf too. Combining rinks and links was a no-brainer.”

To add to The Rink experience, volunteer marshals on the hole will be outfitted in referee uniforms, while rink boards will outline the hole from tee to green, replacing traditional roping.

Seating for The Rink is adjacent to the Coors Light 19th Hole Beer Garden. In-seat service and giveaways will be available to ensure fans don’t miss out on the action. A $1,000 donation to Ronald McDonald House Charities Canada will be made for every birdie made on the hole during championship play, Thursday to Sunday.

Television cameras will be able to pick up the full rink during broadcasts to give fans a unique experience watching golf. This concept is very neat and very Canadian.

You can follow the the 7th hole on social media using #TheRink. The tournament will be televised Thursday and Friday afternoon on The Golf Channel while CBS will broadcast weekend coverage in the afternoon.