According to Merriam-Webster, Parity is a noun that is defined as “the quality or state of being equal or equivalent”. Long story short, it means that all parties involved should have a similar or equal chance of succeeding.

When it comes to the Stanley Cup Playoffs, we have all witnessed that the success you had during the regular season doesn’t always translate to success in the playoffs.

Case in point: The President’s Trophy. Since it was first awarded to the Edmonton Oilers in 1985-86, eight teams have gone on to win the Stanley Cup that same season. An additional three more played for the Stanley Cup, but lost. In the modern era of the NHL (Post-2004 Lockout), more President’s Trophy winners have been knocked out of the first round (4) than have reached the Stanley Cup Final (3). After Washington bowed out to Pittsburgh in the second round this year, it marks the fourth-straight season that the best team in the regular season failed to win their conference.

One of the things NHL Commissioner Gary Bettman has advocated for in the modern era is competitive balance, where in September every team should go into the season saying the popular soccer chant “I Believe That We Will Win”. He said prior to the 2015-16 season, “Our competitive balance is extraordinary. Seven teams made the playoffs that didn’t make it the year before. And, the entertainment value of the game has never been better.” 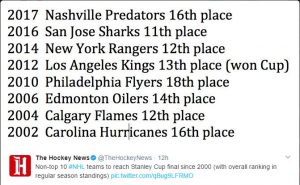 Let’s look at the Predators. Based on regular season points they finished 16th in the league. They are the eighth team since 2000 to play for the Stanley Cup without having a Top-10 record according to The Hockey News. Of those teams only the 2012 Kings won the Stanley Cup, which means that the underdog will at least get you an invite to the party but not a guarantee you’ll be sitting in the final chair when the music stops.

A lot of people were critical of Bettman when the league decided to expand the league to Sun Belt cities such as Raleigh, Atlanta, and Nashville. But after evaluating the performances of those markets over the long run, there have been more successes (Dallas, Carolina, and Tampa Bay with Stanley Cups more recently than the last Canadian team) than failures (Atlanta). Now Nashville is the latest city to join the Stanley Cup Final party.

General Manager David Poile has been the architect of their success. He’s been at the helm since Day 1 in 1998. It’s been a 19-year in the process, but anyone who’s followed the NHL has known that it was only a matter of time that the Predators would make it this far. He rolled the dice in trading Shea Weber for P.K. Subban and it worked out in his favor. He’s also been able to turn AHL graduates from Milwaukee such as Viktor Arvidsson and Colton Sissons into impact players during the playoffs. He also stuck with a veteran in goal (Pekka Rinne) instead of thinking he was the problem they weren’t having success and trying to acquire the next “it” goalie like some other teams have been trying to do.

Running a team with a salary cap isn’t easy when teams are pressured to win immediately. But sometimes you have to take a couple steps back (missing the playoffs in 2013 and 2014) before the road to success (first round loss in 2015, second round Game 7 loss in 2016) is paved.