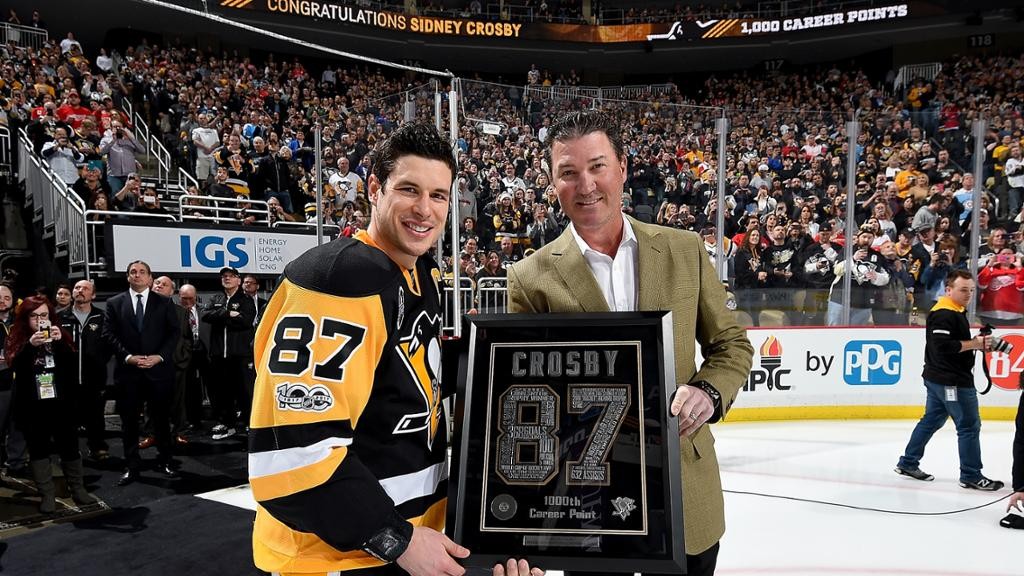 Sidney Crosby became the 86th player in NHL history to score 1,000 points on Thursday, and the Pittsburgh Penguins honored his achievement prior to today’s game against the Detroit Red Wings.

The milestone point came as an assist on a Chris Kunitz goal 6:28 into the first period against the Winnipeg Jets. It took Crosby just 757 games to reach 1,000 points—which is the fastest any player has reached the milestone since Steve Yzerman notched his 1,000th on February 24, 1993 in just 737 games.

The pre-game celebration included Crosby being presented with a plaque donning his No. 87 made from the roof of Pittsburgh’s Civic Arena, which was home of the Penguins from 1967-2010. Crosby skated to Lemieux, hugged him and posed for a photo as the crowd cheered.

Crosby’s teammates also honored him pror to the team’s pre-game meeting, with longtime teammates Evgeni Malkin, Marc-Andre Fleury, Kris Letang and Kunitz presenting the captain with a golden stick displaying the dates and opponents of his first and 1,000th points, and every 100 points between. They also gave Crosby a stick-holder, made from the Civic Arena roof, for the golden stick and his stick from the game against Winnipeg.

Crosby’s first NHL point came in his first game on Oct. 5, 2005, against the New Jersey Devils at Continental Airlines Arena. He assisted forward Mark Recchi on Pittsburgh’s only goal at 5:36 of the third period in a 5-1 loss.