Abuse of Officials Has No Place in Hockey

I’ve been a hockey official for 17 years now. I can’t tell you how many games of various levels I have officiated but it’s somewhere near 1,000. I’ve been fortunate to not experience abuse to the point where I’ve feared for my life but I have seen some parents and coaches creep very close to the line between venting your displeasure with a decision I made on the ice and assault.

I started officiating at the age of 15 as a way to get some extra skating in and to make some extra money during the winter months. This isn’t my full-time job, however I take my job seriously every single time I put on the stripes.

I understand the pressure coaches and players have to win, especially at the travel level where parents are paying a lot of money to see their children play. My first priority on the ice is to keep players safe and to ensure players are playing the game within the confines of the rulebook.

I’m part of a few officiating groups on social media and it is interesting to see stories of other refs from across North America and Europe share various stories of their tales on the ice. One story I read out of Canada this week really irked me and led me to write about it.

In Saskatchewan, a Bantam A playoff game got so hostile that the officials decided to cancel the game in the third period. Instead of the home association standing behind the officials and putting the blame on the parents and coaches they decided to suspend the officials because they cancelled a game that now causes logistical problems to complete it.

Kyle Chudyk was officiating a game between Hague and Prince Albert January 26. Prince Albert was the visiting team and things got so hostile and obscene from their side that a fan and their coach was removed from the rink for abuse of officials. Chudyk told CKOM that Bill Hoko – the Prince Albert head coach – said that it’s the officials job to put up with some kind of abuse and harassment.

Sorry but that’s alternative facts. To make matters worse is that Hoko is the president of the Prince Albert Minor Hockey Association. A person in a leadership role of a hockey association shouldn’t get so abusive that he’s kicked out of a game.

USA Hockey and Hockey Canada have strict Zero Tolerance policies in place to curb abuse of anyone in the game. Whether that’s parents abusing their kids or coaches abusing officials.

Also in this game, the Hague called the Rosthern RCMP to observe the situation. That’s right. The police had to be called to a hockey rink where 14-15 year old boys were playing because the grown adults couldn’t handle themselves. How embarrassing is it for the kids on the ice. This reminds me of a situation in a tournament earlier this season where I had a goalie ask me to remove a parent who was heckling the players from behind the net. Once I saw him yelling and screaming at 12 year old girls for not having their stick on the ice to get a pass while in front of the net I removed him from the arena. My partner who was standing in front of the bench heard “That’s my dad.” He must be so proud for having to watch the rest of his daughter’s game from the lobby. 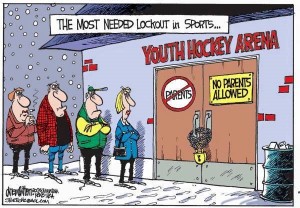 When parents make youth sports about themselves and not the children, this is what’s needed.

Back to the Saskatchewan incident, Chudyk said fans from Prince Albert began leaning over the glass and threatening the officials, swearing at them in both English and Cree. This is what led him to cancelling the game due to the environment no longer being safe. The RCMP escorted the players from the dressing room to their cars outside where they still received verbal abuse and insults.

He filed a game report with the league and Saskatchewan Hockey Association. He was informed last week that he was suspended from officiating bantam games in the SVMHL and from provincial playoff games for the remainder of the season. Like I stated earlier the SHA called the cancellation of the game “unwarranted” and said it created logistical problems to get the game completed.

I say shame on the association for not standing behind their officials and basically taking the side of the teams. I’m sure that cancelling the game was a very last resort and it should have never got to that point. I think if I was in that situation I would have kicked out every single person out of the rink with exception of the arena staff, coaches and players. It’s happened in soccer when fans don’t behave themselves, so why not kick out a couple dozen people from a hockey arena.

Next time you attend a hockey game, keep in mind that coaches and officials are people too and that we make decisions that you don’t agree with. Would you want someone yelling at you when you make a mistake at your job? I thought so.

Between the incident, suspension, and the league not having the backs of the officials, Chudyk is considering hanging up the skates and not officiating again.  “We would’ve thought we’d have some backing from the league. Disheartened and unappreciated are the two words I would use for how I feel.”

officiatingRefereesoap box
← Previous Story Could the World Cup of Hockey replace Olympics participation for NHL?
Next Story → Are former players shedding light on problems in Detroit?