Clock Running Out for NHL Participation in Olympics

The 2018 Winter Olympics are just over 13 months away but the deadline is rapidly approaching for whether or not NHL players will be making the trip to South Korea for the games. 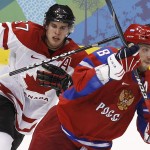 As Larry Lage written two weeks ago, the decision is still up to the NHL and the NHLPA to come to an agreement.

The league floated the idea to the players union that the NHLPA eliminate its opt-out option in 2019 and extend the Collective Bargaining Ageement three years through the 2024-2025 season in exchange for participating in a sixth consecutive Olympics. The NHLPA rejected the idea, on the basis that it’s something they are interested in exploring. The owners seem to have negative feelings towards the Olympics, as their arenas sit empty for two-plus weeks while their players are risking injury playing for their country.

But the concerns the NHLPA have lie deeper. The key issue lies with finances and how much of their salaries go into escrow each paycheck.

… an emerging issue for players involves an escrow system that ensures a 50-50 split of hockey-related revenues between the players and the owners. Players have 16 percent to 18 percent of their paychecks put in escrow each season. After calculations have been made following recent seasons, players have ended up losing about 13 percent of their pay by getting 3 to 5 percent of the escrow refunded from the league. That has happened in large part because the U.S. dollar is worth about 25 percent more than it was against Canadian currency five years ago. A $5.2 billion broadcast deal with Rogers for national TV rights in Canada, for example, is worth a lot less than it was when that deal was done in 2013.

One organization is staying out of the NHL-NHLPA discussions is the IIHF. IIHF President Rene Fasel said the decision isn’t up to them and pretty much feels that while they hope the two sides come to an agreement, they will still have a hockey tournament to conduct no matter who shows up. Another aspect of this is that the IIHF is no longer covering insurance or expenses for players to play. They spent $14 billion in insurance and travel expenses to get the professionals to Sochi for the 2014 Olympics.