Granlund Brothers Road to the NHL 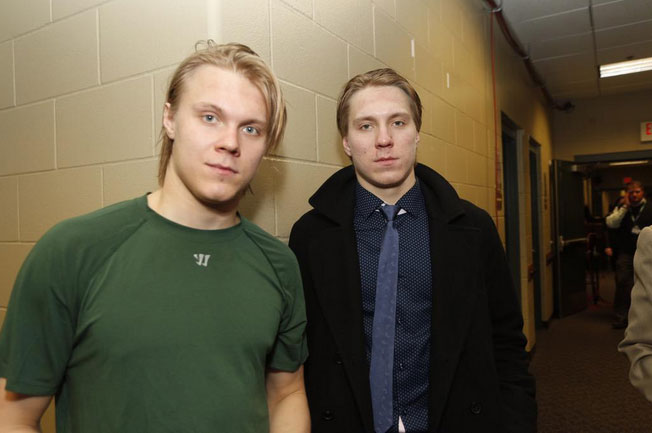 Sports have had all kinds of iterations of brothers playing with or against each other. At one point there were three Molina brothers playing baseball: Jose, Bengie, and Yadier. All three of them were catchers. Only Yadier is still active. Hockey has had their share of family ties. The Sutter brothers spring to mind. One of more current brother pairings is Mikael and Markus Granlund, who hail from Oulu, Finland.

The brothers are both offensive-minded players. Markus is a forward and Mikael is a center. Mikael, who is a year older than Markus, has established himself as a consistent source of assists, which stands to reason given his position. He’s also taller (6’0″ to 5’10” than Markus, but only a pound lighter than him (183 to 184). As of Nov. 30, he already had nine on the season. He’s not in the top 10, but he’s well above the league average of 4.1.

Mikael had a little longer road to pro hockey, even having to sue his Finnish team over a contract dispute. He ultimately came to the NHL and the Minnesota Wild, his only team so far in his career, in 2012. He came to the league with a little bit of notoriety – having scored a lacrosse-style goal against Russia in the IIHF World Championship in ’11. Markus arrived in ’13 with the Calgary Flames and played there for two seasons before the Flames traded him to the Canucks during the ’15 season.

There was never really much of a rivalry between the two brothers. When NHL.com asked Markus about any comparisons between he and his brother, he said, “I have my own style, but he’s my brother so of course we learn from each other. I’m not so sure what things he might learn from me, though. Mikael’s got more power and he’s stronger than me but we are our own players.”

Neither brother scored during the Nov. 29 game, though Markus had two shots on goal to Mikael’s one. Mikael spent more time on the ice than his brother (20:05 to 15:15). Vancouver won, 5-4, which meant that the younger brother got temporary bragging rights. Since Markus came into the league, Minnesota went 5-3 against Calgary and then 3-4 against Vancouver (including the Nov. 29 victory). So Mikael has a slim 8-7 margin overall over his sibling.

Ironically, Markus has twin brothers for teammates – Henrik and Daniel Sedin, who are both longtime NHL veterans. They have played for Vancouver for 16 years and have never played for any other team. It’d be interesting to see if the Granlund brothers ever joined forces at some point in their careers. Given that they are both young (24 and 23), that could very well happen down the road. They would have to find another way to keep score against each other.