It appears as though the jerseys to be used by the Toronto Maple Leafs during the Centennial Classic have leaked online.

According to SportsLogos.net, who originally posted the jersey leak, an image was tweeted to them by a reliable anonymous source.

While the overall design is likely to be similar, the leak comes from an infant size jersey so there are almost certainly details left out which will appear on the final jerseys. SportsLogos.net suggests some of these details may include laces for the collar, or a shoulder patch.

What do you think of the Maple Leafs Centennial Classic Jerseys? 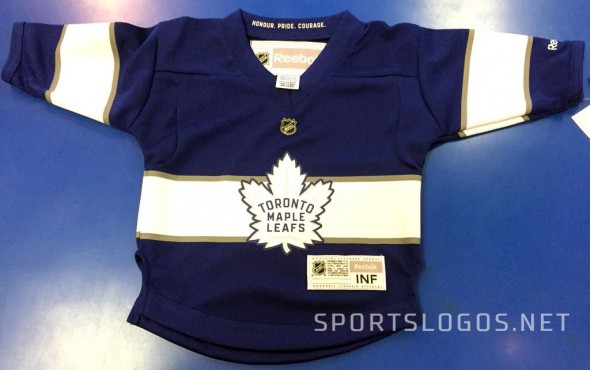 In case you’re not familiar, the inaugural Centennial Classic will be an outdoor game played on January 1st, 2017 and features a rematch of the 2014 Winter Classic between the Toronto Maple Leafs and Detroit Red Wings.

The game will be played at BMO Field in Toronto which has a record attendance of 30,226 fans. While the Centennial Classic will fall well short of the 105,491 attendance from the Winter Classic at Michigan Stadium, it will be interesting to see how many fans can squeeze in for this matchup between two great hockey cities.