There will be splashes of gold joining the silver and black in Los Angeles this season.

The Kings are celebrating their 50th anniversary this season and was awarded the All-Star Game along with it. Just before the season kicks off, the team unveiled special logos for the team and all-star game as well as a uniform that will be worn during select home games this season. 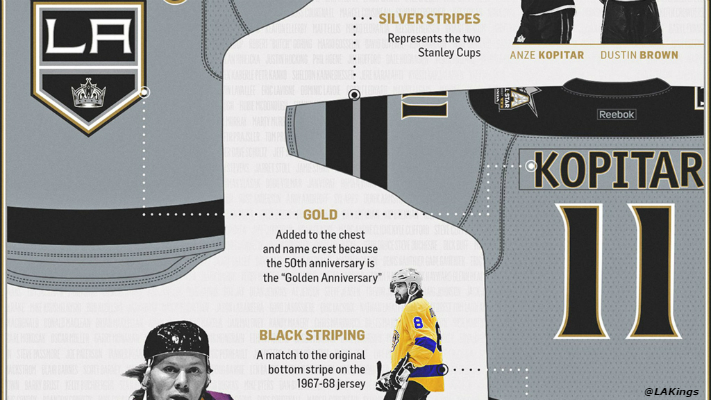 The gray-based jersey features black shoulder yokes, and black numerals and nameplates, along with the Kings’ “LA” crest. All elements are trimmed in white along with gold to commemorate Los Angeles’ 50th anniversary in the NHL.

The 50th anniversary jersey will serve as the Kings’ alternate this season. They will wear it during 14 home games at Staples Center, debuting against the Vancouver Canucks on Oct. 22.

“As we continue toward the start of the hockey season, our 50th anniversary, sharing this jersey for the first time is a real thrill for us,” Kings president of business operations Luc Robitaille said. “We put a lot of thought, time and effort into the design and we are very proud of the final product.”

The Kings also tweeted a video to go along with the uniform release, including memorable moments from franchise history from their early days at the Forum, to their recent Stanley Cup championships. Robitaille was featured in it (but a certain player who wore No. 99 wasn’t).

As for the January 29, 2017 All-Star Game, the design incorporates elements that come to mind when you think of Los Angeles: Hollywood, glitz, and glamour. The logo features a jeweled “LA” typography that is giving a nod to the entertainment side of Los Angeles. The star in the background has three visible points, signifying the three times they have hosted the mid-season exhibition (1981, 2002). The four stars flanking the 2017 year represent the four divisions in the NHL.

“The stars shine in the city of Los Angeles with the many major award shows and now they will illuminate even brighter when the NHL All-Stars come to STAPLES Center in 2017,” said Brian Jennings, NHL Chief Marketing Officer and Executive Vice President. “Our All-Star identity showcases our event which was inspired by the magic and glamour of this great city and the Kings loyal fan base. We are excited to be returning to Southern California.”

What we do know is that the NHL All-Star Skills Competition will be held on Saturday, Jan. 28, the day before the main event itself. The NHL Fan Fair will begin Thursday, Jan. 26 and will run through the weekend at the Los Angeles Convention Center, located next to STAPLES Center. Other details regarding tickets will be released at a later date.