NHL using CGI advertising at World Cup—and I hate it

The NHL took their advertising efforts to a whole new level during yesterday’s opening match ups of the 2016 World Cup of Hockey by using CGI to replace the in-arena advertisements on the boards with those of alternative sponsors.

I only noticed because there was a brief second early on in the first period of the USA/Team Europe game when the boards looked “glitchy,” like there was a disturbance in the Matrix. Then I noticed that different camera angles seemed to show different ads. The main camera view from center ice showed one sponsor, while up close shots of the goal showed a myriad of advertisements on the boards.

The whole thing was incredibly distracting and heavily detracted from my viewing experience, although, in all fairness, anyone rooting for Team USA didn’t have much to root for yesterday. And evidently I wasn’t the only one who noticed, as some hockey fans took to Twitter to share their thoughts too: 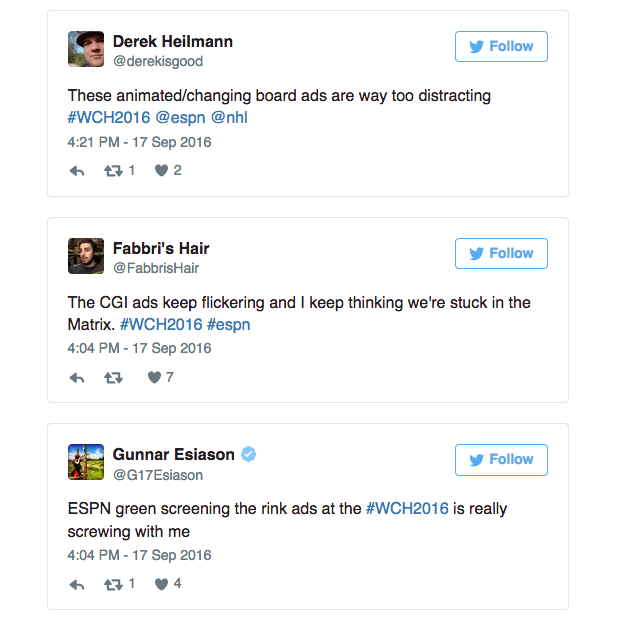 Evidently this is a new initiative for the NHL to allow broadcaster to show market-specific ads. According to Sports Business Daily, “it allows the NHL to create four separate board advertisements for the different broadcast feeds lined up for the World Cup tournament. TV rights for the event are held by ESPN (United States), Sportsnet (Canada-English), TVA Sports (Canada-French) and ESPN International, which has the exclusive rights in more than 20 countries served by its Pacific Rim and Latin North networks.”

A European company called Supponor is providing the technology for the World Cup.

Hopefully this technology doesn’t make it into regular NHL hockey feeds anytime soon. It’s bad enough that they have been using digitally-projected advertisements on the glass behind the nets for the past few seasons, and the idea of advertising on jerseys seems to gain momentum on an annual basis.