Yesterday while researching the Winter Classic post, I was browsing SportsLogos to figure out what era the Blackhawks and Blues logos to be used in the Winter Classic came from. Under their Latest Updates section I saw an unfamiliar San Jose Sharks logo. Since it was approaching 7:30 am and I needed to be at work in an hour I didn’t do much digging.

Fast forward to last night where it was officially announced that the Sharks unveiled secondary logos to supplement their already existing set.

The new logo- designed by original Sharks logo artist Terry Smith- features a more angry/ferocious looking shark compared to the newer main and secondary set. The expression on the shark reminds me of the logo of their AHL affiliate San Jose Barracuda who occupies the same building. 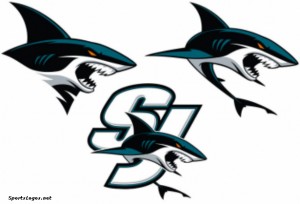 If you are looking for this logo to appear on the uniform this season, don’t hold your breath. As told by Kevin Kurz of CSN Bay Area:

So, those logos are not expected to be on any jerseys for next season. I would have thought they would have on the black thirds, but…no.

One possibility is in 2017 when Adidas will take over from CCM as the league’s uniform supplier.

The club announced that the logos will appear this season in a marketing/promotional capacity. In layman’s terms that means apparel like hats, t-shirts, and things they give away at games. If you’re able to score a Los Tiburones jersey on October 29, awesome!