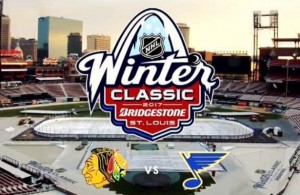 The game will take place January 2, 2017 at 1:00 p.m. ET, and will be televised on NBC, Sportsnet and TVA Sports. Part of the reason St. Louis was selected because the Blues are celebrating their 50th season in the league.

The Blackhawks will become the first team to appear in the New Years Day event for a third time, and will be the second occasion it will be held off it’s traditional Jan. 1 date.

“What a great way to celebrate 100 years of NHL hockey, playing in the shadow of the Gateway Arch, which honors the westward expansion of the United States,” NHL Commissioner Gary Bettman said. “The Blues and the Chicago Blackhawks will help commemorate the expansion westward of the National Hockey League. … At the same time we will have the opportunity to shine a spotlight on the incredible growth of hockey in St. Louis. There will be plenty of history to commemorate and lots of excitement to anticipate.”

This is a great partnership opportunity for the Cardinals and Blues as the region is recovering from the Rams leaving and returning to Los Angeles in January. It marked the second time a NFL franchise left St. Louis, following the (Arizona) Cardinals leaving in 1987.

“We have this wonderful relationship with the Blues,” Cardinals president Bill DeWitt III said. “It’s really a relationship and that relationship has continued to grow. … Now the Winter Classic is really a culmination of a partnership that I know will continue to grow in the years to come.

“… I’d like to thank Commissioner Bettman for making this possible. We’ve been bugging him for a number of years in ways subtle and not so subtle. Now we finally have this event.”

Both teams were suggesting using throwback uniforms for the game based on the logo’s revealed by both teams during the press conference. The Blackhawks logo looks similar to the 1957-65 logo while the Blues logo looks like the one they used in their first 10 years in the NHL.

The two Central division rivals are separated by 300 miles and should setup for an exciting game. Last season the Blues took down the Blackhawks in seven games in the Western Conference First Round of the 2016 Stanley Cup Playoffs.

There will be many events in town leading up to the Winter Classic, including a Kid Rock concert at Scottrade Center and an alumni game featuring the likes of Brett Hull, Al MacInnis, and Chris Pronger.