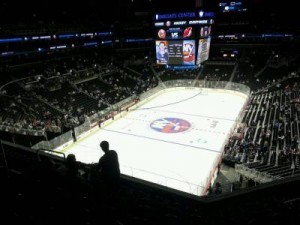 When the New York Islanders decided to move away from Nassau Veterans Memorial Coliseum on Long Island to Barclay’s Center in Brooklyn, we saw the writing on the wall that this was a poor decision although the Coliseum was the worse arena in the NHL.

For starters, Barclay’s Center wasn’t built with hockey in mind. Compared with arenas such as Madison Square Garden, United Center and Staples Center, Barclay’s wasn’t built with the type of retractable seats to give adequate sight lines for both hockey and basketball. Because of this they have some of the best sight lines in the NBA, but for the Islanders it’s a disaster.

One end of the arena is missing most of the lower bowl of seats because a hockey rink is longer than a basketball court. The scoreboard isn’t over center ice, its over the blue line. The only other rink where this occurs is at AT&T Center in San Antonio, another venue designed more for the NBA’s Spurs than the AHL’s Rampage.

After the first year of this partnership, Isle’s management seems to already have regrets. There’s been media reports this week that they have been talking to officials in Queens about building a new arena at Flushing Meadows near Citi Field. Other reports have them exploring returning to Long Island at Belmont Park.

If the Islanders wanted a new arena with tax payers and local governments subsidizing millions of dollars towards building it, they should have done to a decade ago before the recession. But they could face an uphill battle if they want any public dollars going towards it, as evidenced with the backlash the Detroit Red Wings and Miami Marlins received from John Oliver last year.

Whatever the Islanders decide to do, fans shouldn’t get excited. Arena plans like this take years to formulate and at least for the next few years, fans should continue to deal with obstructed views at Barclay’s Center.