The time is now for Red Wings’ Holland to act 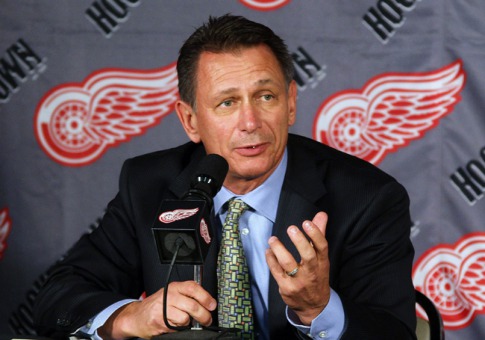 These next few weeks could be very telling on the future of the Detroit Red Wings—and that of General Manager Ken Holland.

The Wings were dealt a huge blow last week with the announcement of Pavel Datsyuk’s retirement, and the fact that they are still on the hook for his $7.5 million cap hit for next season even though he won’t play for the team. And with the draft just a handful of days away, Holland hasn’t instilled much confidence in Detroit’s fan base that he is aggressive enough to address this and several other hurdles facing the Red Wings.

Simply put: retaining Datsyuk’s cap hit is not an option. That’s $7.5 million that they could use to court free agents like Steven Stamkos, Milan Lucic, Keith Yandle, or Andrew Ladd—moves that will make the Red Wings a better team now.

And that’s what it really boils down to. It’s not about the playoff streak like some misguided fans would have you believe, it’s more about taking risks in order to ice the best team possible come October when the puck drops. Retaining Datsyuk’s salary simply does not let the Wings do that.

It’s not easy to convince a team to take on $7.5 million in dead money. While some teams needing to hit the cap floor will be willing, they will also want something more in return. That’s where the problem lies. Holland isn’t willing to forfeit the future of the team just to alleviate Datsyuk’s contract. And that’s understandable—to some extent.

Players like Dylan Larkin, Andreas Athanasiou and Anthony Mantha are off limits. That’s a given because those players are too important to the future of this team. But what about a Tomas Jurco or Teemu Pulkkinen—NHL-ready players who are just too similar to pieces Detroit has in the lineup or in the minors.

Heck, the team will have a logjam at defense next year with so many prospects out of minor league options. Xavier Ouellet, Ryan Sproul and Nick Jensen could all be appealing options in the right scenario. Or, if Holland isn’t willing to part with any of those prospects because of their NHL potential (and appealing entry-level contracts), then offer up Brendan Smith or Jonathan Ericsson—experienced players who can fill an immediate void on defense for the right team while creating space for some of Detroit’s other prospects.

Sure, this is all fantasy hockey folly and far from the real thing when real money and real players are involved. But it’s frustrating to see how other GMs have adapted to the risk-taking posture of the salary cap era while Holland continues to play it safe. Look no further than Holland protégés Steve Yzerman and Jim Nill. Both have been incredibly successful building playoff contenders since leaving Detroit. Nill specifically has been aggressive in building the Dallas Stars’ offensive core of Tyler Seguin, Jason Spezza and Patrick Sharp through trades, and adding other supporting pieces through free agency. Yzerman benefitted from inheriting former first overall draft pick Steven Stamkos, but he has made a series of bold decisions over the years that have made Tampa Bay a contender year in and year out.

That’s why the prospect of carrying the dead weight of Datsyuk’s contract next season is so disgusting. Moving his $7.5 million cap hit would free up cap space to allow Holland to go after prized free agents that will make Detroit a better team right now. And he has the bargaining chips to sweeten the pot to get a trade partner to take the contract off Detroit’s hands. So if Holland doesn’t have the audacity to alleviate Detroit of its $7.5 million handicap, fans have to wonder if they wouldn’t be better off with another general manager who has shown the ability to aggressively improve his team sitting in the front office instead of Holland.

Detroit Red WingsKen Holland
← Previous Story Is All Star Dylan Larkin a contender for the Calder Trophy?
Next Story → NHL using CGI advertising at World Cup—and I hate it