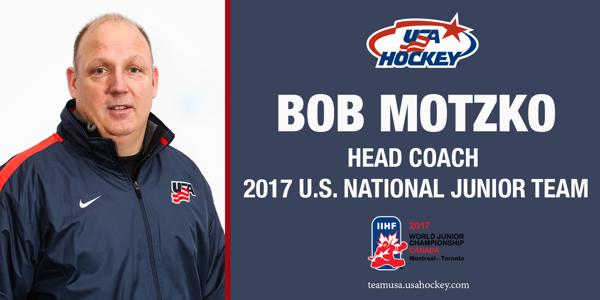 The 2017 IIHF World Junior Championship is still right months away, but the United States already has their coach. St. Cloud State head coach Bob Motzko will lead the best American junior players in the tournament held Dec. 26, 2016 – Jan. 5, 2017, in Montreal and Toronto, Canada.

He will have the task of leading the U.S. to consecutive medal finishes for the second time ever  (2010 – gold, 2011 – bronze) after earning bronze in Helsinki at the 2016 tournament.

A native of Austin, Minn., he has been the head coach at his alma mater for 11 years and recently led the Huskies to the No. 2 overall seed in the NCAA tournament before falling to Ferris State in the first round.

Motzko is no stranger to the USA National Junior Team, as he was an assistant in 2014 under Don Lucia. that year, they finished fifth after losing in the quarterfinals to Russia.

“Bob has found success everywhere he has coached and we’re excited to have him as head coach of our National Junior Team,” said Jim Johannson, assistant executive director for hockey operations at USA Hockey, who will also serve as general manager of the 2017 U.S. National Junior Team in a USA Hockey release. “He has a familiarity with our player pool that should blend well with his ability to get the most out of players and we look forward to his leadership.”

His first order of task will be running the National Junior Evaluation Camp, to be held this August in Plymouth, Michigan. Approximately 40 players will be invited in the coming months. The rest of his assistants and support staff has yet to be named.

Motzko played college hockey at St. Cloud State, where he played under Herb Brooks. After graduating in 1986, he began his coaching career as an assistant the following season under the gold-medal winning coach before going to the USHL in head coach and general capacities with the North Iowa Huskies and Sioux Falls Stampede. He’s also a two-time NCAA title winning assistant coach, winning titles with University of Minnesota in 2002 and 2003 with Lucia at the helm.