Just a few days ago, 21 nations were still trying to achieve one of the three coveted remaining spots in the men’s hockey competition at the 2018 Winter Olympics in Pyeongchang, South Korea. As of today the number of qualifiers have shrunken to 12.

The men’s field will feature 12 teams, with the host nation joining the top eight teams in the IIHF World Rankings following the 2015 World Championships. The formula was based on results from the World Championships in 2012, 2013, 2014, and 2015 in addition to the 2014 Olympics. Those eight nations were Canada, Russia, Sweden, Finland, United States, Czech Republic, Switzerland and Slovakia.

Check out the recaps from this weekend’s action below.

The 18th ranked Italians hosted the tournament in Cortina d’Ampezzo host of the 1956 Olympics. The first day of action saw two high scoring games, with Italy posting a 8-0 shutout over Serbia and Great Britain holding off a fierce Netherlands side 6-5. After exchanging goals all night, Netherlands got the equalizer at 51:08 from Diederick Hagemeijer. The Brits got the go ahead goal with 4:12 remaining from Mark Richardson. The Dutch comeback attempt was thwarted as they took two penalties in the final four minutes.

Day 2 saw Great Britain score six goals again as they defeated Serbia 6-2. The nightcap saw Italy’s Marco Insam score 39 seconds into the game against the Netherlands and like their first game the Dutch tied the game twice but couldn’t pull through as Italy won 4-2. Day 3 featured already-eliminated Netherlands crush Serbia 7-3 before Italy took on Great Britain. Italy never allowed Great Britain to get in the game as they scored three goals in the first period and eventually took a 4-0 lead before the British side tallied two power play goals. The Italians jumped back to a 5-2 lead short after allowing the second goal and scored an empty netter to win 6-2. They will now travel to Norway to play France and Kazakhstan in addition to the hosts. 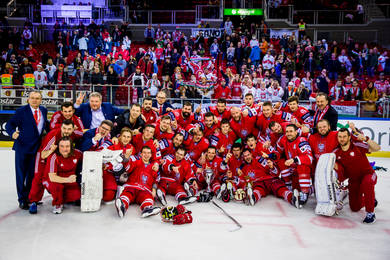 The first night saw Poland and Hungary post victories. Poland jumped out to a 3-0 lead after the first period and never looked back as they defeated Estonia 6-2. The Hungary gave the host crowd in Budapest a good showing as they scored twice early in the third period en route to a 4-0 win over Lithuania. Day 2 saw lopsided victories in both games. Poland scored the first nine goals of their game against Lithuania. Daniel Bogdziul’s goal with 4:55 left prevented Lithuania from getting shutout for the second straight game. Hungary’s István Sofron scored 1:50 into their game against Estonia and it was smooth sailing for the host after that as they won 7-1.

Day 3 played out just like Group G, where two eliminated teams served as the under-card for two teams looking to advance. Estonia defeated Lithuania 4-1 behind two power play goals. The final game of the weekend could be among of the best of the Olympic qualifying tournament. Hungary and Poland skated to a 0-0 tie in regulation and overtime before a shootout was necessary to determine who advanced. Krzysztof Zapala went first for Poland and scored. The second players for both teams had their shots saved. It was up to Frank Banham to give Hungary a chance of extending the shootout but his shot rang off the post to allow 22nd ranked Poland to advance. They’ll travel to Belarus for the final round to take on Denmark and 2014 Olympic contestants Belarus and Slovenia.

Like Group G, Group J was contested in a former Winter Olympic host city. Saporro, Japan hosted the Winter Olympics in 1972. This group had the fewer goals than the other two groups, with the first four games resulted in a shutout for the winning team. Day 1 saw the hosts post a 3-0 shutout against Croatia. Yuto Osawa scored the first goal of the game with 5:10 remaining in the second period. He would score his second of the night with 4:21 remaining in the game and Go Tanaka would put the game out of reach with a goal 20 seconds later. Ukraine would shutout Romania 3-0 with goals from Vladyslav Luhovy, Andriy Mikhnov, and Artem Gnidnko. Day 2 would see lopsided shutouts, with Japan beating Romania 7-0 and Ukraine scoring six goals en route to a win over Croatia.

Day 3 saw Romania and Croatia get on the scoreboard, but it was the Croatians who came away with a 4-1 win. The final game saw Japan and Ukraine remain scoreless until 6:19 of the third period when Kenta Takagi scored. Daisuke Obara added a power play goal four minutes later. Ukraine would cut its deficit in half when Yuri Petrangovsky but that wasn’t enough as the Japanese advanced. Japan outscored its opponents 12-1 and allowed the fewest goals of all 12 teams who played this weekend. They’ll head to Latvia to face the 2014 Olympic quarter finalist, 2014 qualifier Austria, and Germany who is looking to qualify for the Olympics after having a streak of 16 consecutive Olympic appearances snapped in 2014.