John Tortorella on Blue Jackets vets: “I’m not getting squat” 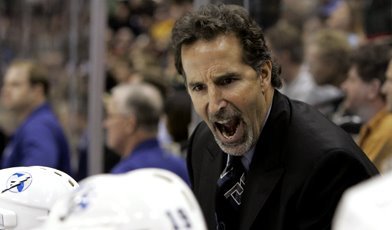 John Tortorella isn’t one to mince words—and he had a few choice things to say about the performance of his Blue Jackets squad.

“Let’s call a spade a spade,” said Tortorella yesterday before the team’s game against the Florida Panthers. “It’s embarrassing, and that’s what we are. I’m not going to tip-toe around here.”

The Blue Jackets went on to lose the game 3-2, extending their current losing streak to three games.

But Tortorella didn’t stop there. He went on to take several jabs at his veterans, going as far as to call them “mentally weak.”

“I see weakness,” Tortorella said. “I think we’re weak mentally, and it’s not the kids. I worry about the kids getting into bad habits by watching other people. That’s frightening to me. That has to change.”

“I think I’m going to need to depend on the kids to get us out of this because I’m not getting squat from the top players as far as that stuff.”

Tortorella specifically called out the number of penalties that the team takes as a weak point in their game. Columbus currently leads the NHL with 194 penalties against, including 26 majors—another league-leading stat.

Alex Wennberg was praised by Tortorella for his play as of late. The 21-year-old has three goals and 13 points in 26 games this season.