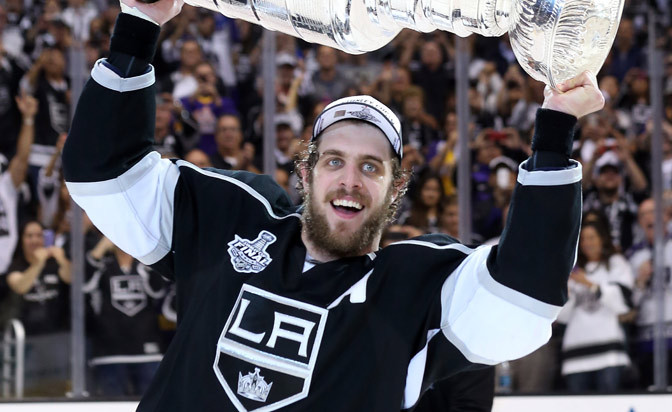 The Los Angeles Kings and franchise cornerstone Anze Kopitar could be at an impasse regarding a contract extension for the 28-year-old forward.

Industry insider Darren Dreger reported earlier this month that the two sides were inching closer to an eight-year deal rumored to pay Kopitar around $10 million a season. However, Damien Cox of Sportsnet.ca reports that there’s a “definite sense the contract talks between the Los Angeles Kings and star center Anze Kopitar have stalled, at least for now.”

Cox claims that a lot of folks are puzzled by the situation. Kopitar wants to stay in Los Angeles and was hoping to get an extension signed this past summer. The Kings were hamstrung by the situations with Mike Richards and Slava Voynov, but those issues have both been resolved. The team opted to buy out Richards, and Voynov, who was in the process of being deported by the U.S. after domestic violence charges were filed against him last year, left the country voluntarily and recently signed with the KHL.

There’s some speculation that the Kings could be trying to negotiate a more favorable agreement with Kopitar. As Lyle Richardson of The Hockey News points out, the Kings have just over $49 million in salary committed to players next season. If Kopitar was awarded a $10 million-per-year contract, that would take the team’s payroll up to $59 million. Richardson notes, “if the cap ceiling fails to significantly increase above the current $71.4 million for 2016-17, the Kings won’t have sufficient room to re-sign or replace pending free agents like Milan Lucic, Christian Ehrhoff, Brayden McNabb, Jhonas Enroth and Trevor Lewis.”

A two-time Stanley Cup winner and three-time NHL All-Star, Kopitar has scored 25 or more goals six times in his nine seasons with the Kings, and posted 70 or more points five times.