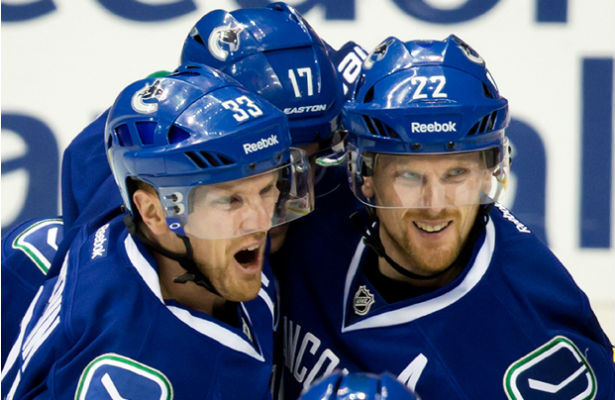 The John Tortarella experiment in Vancouver certainly didn’t last long. He was ousted after one abysmal season in Vancouver, and replaced last year by Willie Desjardins. The turnaround was immediate, and Desjardins helped guide the Canucks right back into the postseason with a 48 win and 101 point campaign. Was this simply beginners luck? Or does Desjardins have what it takes to finally lead this core group to a Stanley Cup?

Vancouver’s top three offensive players remain unchanged. The Sedin twins, Henrik and Daniel, will primarily play alongside Radim Vrbata and do boat loads of scoring for this team. Vrbata scored 31 goals last year playing with the twins, and should have a similar output again this year. Henrik Sedin also saw his goal scoring output jump a bit from the previous season as he tallied 18 to go along with his 55 assists. Brother Daniel added another 20 goals and 56 assists as they collectively lead the charge for the Canucks.

The supporting cast up front includes Alex Burrows, who had 18 goals of his own last year, and the newly acquired Brandon Sutter, a 20 goal scorer with the Pittsburgh Penguins last season. Sutter has scored 20+ goals twice in his career now, and will have an excellent chance of doing that again with the Canucks. Chris Higgins, Jannik Hansen, and Bo Horvat will provide additional depth this season.

On the blue line, Dan Hamhuis and Alex Edler will lead the charge. Both veterans had solid seasons in 2014-15, and will be expected to return to their top form again this season. Their supporting cast will include Yannick Weber, Christopher Tanev, Luca Sbisa, and Matt Bartkowski.

The goaltending situation remains an interesting one. As of now, it appears as though all will lie on the shoulders of Ryan Miller. Vancouver acquired him for this reason, but last season he split his time with Eddie Lack. Now that Lack is out of the picture, Miller should be the go-to guy, even if he stumbles at times. Miller is used to carrying the weight and playing a lot, so this should be no adjustment for him. Richard Bachman is set to play the backup role, but time will tell how often he sees his name as the starter.

Miller should feel confident entering the season as the true number one, with no possible competition brewing. Expect him to thrive on that confidence and put together a great season. This confidence will also help the team around him play at their top level. The Canucks are in a difficult Pacific Division, however, and will see a more skilled Edmonton Oilers team, in addition to the up and coming Calgary Flames, and already persistent L.A. Kings, San Jose Sharks, and Anaheim Ducks. Another 100+ point season certainly isn’t out of question, but the Canucks will have to work harder to earn it this year.