This Wednesday is the NHL Awards Show from the MGM Grand in Las Vegas. Rob Riggle is the host and musical entertainment will be provided by Daughtry. There are many awards up for grabs and here are our predictions for who will take home the hardware. 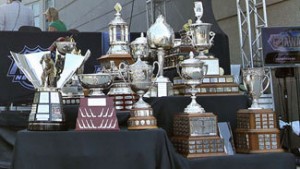 Eddie’s Pick: It’s been 13 years since a goalie won the Hart Trophy. Price will join the likes of Jose Theodore and Jacques Plante as Canadiens goalies to win it.

Matt’s Pick: Without Price, the Canadiens would season would have looked a bit different. He’s the clear winner.

Matt’s Pick: P.K. Subban was great this season, but Karlsson was still better.

Eddie’s Pick: The Price is right. Sorry for the pun, but the Vezina has Carey’s name on it.

Matt’s Pick: Carey Price has this one on lock down.

Eddie’s Pick: Ekblad played bigger than his 18-year old body this season. He kept them in the playoff hunt for as long as he could.

Eddie’s Pick: Bergeron is the best two-way player we’ve seen since Pavel Datsyuk of five years ago. He wins it again.

Matt’s Pick: Bergeron is a stud and his two-way play was remarkable again this year.

Eddie’s Pick: Kopitar was assessed  five minor penalties in 79 games. That’s pretty sick for someone that’s on the ice as much as he is.

Matt’s Pick: Jiri Hudler quietly had a career year and did it all while being a gentleman.

Eddie’s Pick: Perseverance doesn’t get any bigger than Letang coming back after his stroke.

Matt’s Pick: Letang comes back to play after suffering from a stroke. This one seems like an easy choice.

Eddie’s Pick: Laviolette because he turned Nashville into a contender despite not having Mike Fisher for the first few months of the season.

Matt’s Pick: Bob Hartley led the Flames to a remarkable season and helped them turn the ship around quicker than many thought.

GM of the Year Award

Eddie’s Pick: Steve Yzerman was believed to be on the hot seat at the beginning of the season after finishing 11th in the East last season. But he worked his magic and took them just a couple wins short of the Stanley Cup.

Matt’s Pick: Steve Yzerman knows how to assemble a great team. He watched it happen under Ken Holland, he’s done it for Team Canada, and now he’s doing it for Tampa Bay.