NWHL Kicks Off with First Draft 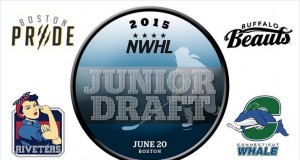 There’s a new hockey league beginning this fall, and it conducted its first draft Saturday. The National Women’s Hockey League is a professional women’s hockey league and is the first league to pay its players. The NWHL will begin play with four teams located in New York, Connecticut and Massachusetts.

The teams are New York Riveters, Connecticut Whale, Boston Pride and Buffalo Beauts. 20 players were drafted across five rounds. The draft order was determined via lottery and players who have completed at least their junior seasons were eligible to be drafted and all those selected during the draft will play out their senior seasons at the collegiate level before entering the professional ranks.

League rules state that a drafted player can then sign with the team that selected her after completing her college career. She also has the option of opting into free agency and sign with any of the other three teams. A player who is eligible to be selected and is not drafted becomes a free agent after completing her senior year. Free agency begins Aug. 17, when rosters will be finalized.

The No. 1 overall draft pick was Alex Carpenter of Boston College. New York selected the forward who won the 2015 Patty Kazmaier Award as the top player in NCAA Division I women’s hockey. She had 37 goals and 81 points last season for the Eagles. She also played for the United States at the 2014 Sochi Olympics, where she led her team in goals with four.

The 20 draft picks were: