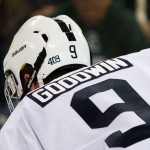 Last week, the NCAA and Penn State reached a settlement regarding the 2011 Jerry Sandusky sex scandal that resulted in revocation of wins from the late Joe Paterno’s record as well as loss of scholarships and bowl eligibility for the football team.

As a result, the NCAA bent over like Claude Lemieux in front of Darren McCarty and gave Paterno his wins back placing him back atop of the all-time coaching wins list with 409.

I don’t know what they were thinking but the Penn State hockey team Friday night against Michigan State wore decals on the back of their helmets, appearing to back someone who harbored and protected a convicted sexual predator is appalling.

From the outside, it looks like they haven’t learned their lesson with the stickers. It was a slap in the face to every victim and their families. The NCAA handed down severe sanctions in 2012 when the program should have arguably been shut down for a period of time like SMU football in the 1980’s. Not only does the NCAA look bad by going back on their word, but the hockey team looks back for standing in solidarity with the scandal and it’s aftermath.

Sandy Barbour, PSU’s athletic director, felt the wrath of the Twitterverse once the photo seen to the right started spreading around the internet.

@gretchnielsen: @SandyB_PSUAD no one in your office thought ‘409’ on helmets might not show “we’ve learned or lesson. It’s not about wins”? Dear Lord.

@SandyB_PSUAD: @gretchnielsen Agree with you. Inappropriate and insensitive. It’s been corrected.

Barbour responded to fans and apologized for what the hockey team did. She also went on to say she spoke with hockey coach Guy Gadowsky regarding the issue. In an interview with WBLF’s “Zone Coverage”, she went on to say that it was too important of a topic to use social media as a venue to get her thoughts out. “This is far too important a subject to vet on a casual; or in social media. I’ll use my own words. It was inappropriate and insensitive of me to do that from a tweet standpoint,” Barbour told hosts Jerry Fisher, Travis Johnson, Tim Owen, and Jacob Kaucher.