Will Marc Staal join his brothers in Carolina? 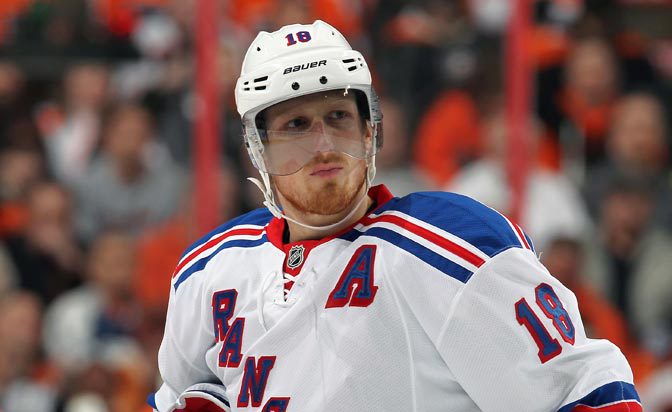 The Carolina Hurricanes currently employ two of the three Staal brothers, Eric and Jordan, playing in the NHL, and youngest brother Jared, 24, plays for the organization’s AHL affiliate, the Charlotte Checkers. Could the team make a bid to nab the final remaining piece to the Staal family before the end of the season?

At 27-years old, Marc Staal of the New York Rangers has emerged as one of the league’s premier defenseman. He’s currently playing in the final season of a five-year, $19.875 million deal he signed back in 2010, but, as last season has shown, talks on an extension could drag out for a while.

Staal said during training camp that he would prefer to get a deal done sooner rather than later, yet, two months later, he remains a potential free agent next summer. The Rangers dealt with prolonged contract talks last season with key players like Henrik Lundqvist and Dan Girardi. After a tenuous contract negotiation last season with captain Ryan Callahan, the team opted to trade him at the trade deadline in exchange for Martin St. Louis.

“Obviously you want to avoid that type of situation,” Staal said of a long negotiation process. “I don’t think it’s helpful to anyone when it goes that far like that, so hopefully that won’t happen and we can find some common ground and move on.”

So what will it take for the Rangers to retain Staal? Ideally, the team would want to ink Staal to a similar deal to Girardi with a variable salary keeping the cap hit at a reasonable $5.5 million a season. Had Staal been a free agent this past summer, it’s reasonable to believe he could have gotten $6 million or more per season, especially given how in demand high-end defenseman are right now in the NHL.

Unfortunately, Staal has the salary cap working against him now. With the cap expected to stay stagnant or rise slightly next season, the Rangers will likely push to keep Staal’s cap hit as low as possible. If he were to hit free agency next summer, it’s unclear how willing a competitive team would be to sign Staal to a mega deal and add his contract to their payroll.

With defenseman at a premium, however, it’s not unreasonable to believe the Rangers might entertain trading Staal come March if he remains unsigned. Would the Hurricanes be interested? Definitely. The team is one of the worst in the league in goals allowed with an average of three goals allowed per game. Staal’s presence would pay immediate dividends on the defensive side of the puck for the struggling ‘Canes.

But the starting price of negotiations would likely include a player like Jeff Skinner—a building block piece the Hurricanes may not be eager to trade. Instead of trading for Staal at the trade deadline, the team might opt to wait until free agency to bring Staal on board.

Regardless of how the scenario plays out, Staal would be a highly sought after commodity should he make it to the trade deadline—or free agency. The longer contract negotiations play out in New York, the more likely it is that the Rangers will have to make some tough decisions about whether to trade Staal or retain him and risk losing him for nothing in free agency. If the Rangers are serious about having Staal as part of their organization for the long haul, they want to get him under contract sooner rather than later.