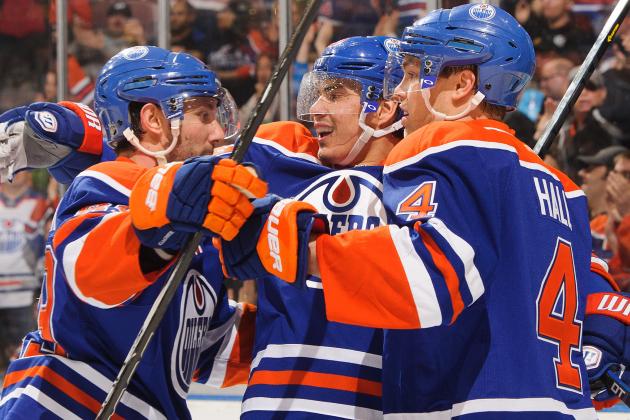 The Oilers have an incredible offensive line up, but can never seem to deliver. The Oilers repeatedly draft new offensive talent, and although the stats look good on paper, the performance we see on the ice is completely different.

Taylor Hall was the strongest force in the Oilers offense last season, posting a career best 80 points. Although Hall put up a great season, the Oilers overall stats were pathetic. The Oilers finished 25th overall in goals scored and with one of the worst puck possession records on the league. Other young players like Jordan Eberle, Ryan Nugent-Hopkins, and Nail Yakupov will need to step up their performance this season if Edmonton wants to be a competitor in the West.

Eberle has been one of the most consistent of the younger forwards on the Oilers, he has been in the top three goal scorers on the team for the past four seasons. Eberle has repeatedly shown that he can deliver and will be one of the players to watch out for this season.

Unlike Hall and Eberle, Nail Yakupov struggled tremendously last season, and it’s questionable whether he will be able to bounce back. After clashing with Head Coach Dallas Eakins, and spending time in the press box early on last season, Yakupov saw a huge scoring slump after coming off an impressive rookie season. In addition to low points, Yakupov had the fourth worst +/- in the NHL, with a -33. If Yakupov can deliver the same performance of his rookie season, in addition to the efforts of Hall, Eberle, and Nugent Hopkins, then the Oilers offense should finally improve and we can stop talking about potential.

Edmonton wasted no time during the offseason in bolstering their defense.  The Oilers acquired Mark Fayne from the New Jersey Devils; Fayne will be a great fit into Edmonton’s defense, Fayne will be able to use his size to neutralize a forecheck, and can be one of the most reliable defensemen on the Oilers. Despite struggling with the Columbus Blue Jackets last season, Nikita Nikitin is expected to be a low risk- high reward players. Nikitin has a great shot and is backed up with strong skating skills.

These new defensemen, in addition to strong players the Oilers already have, like Andrew Ference, create a great situation for the Oilers to keep pressure off their goaltenders.

The combination of Viktor Fasth and Ben Scrivens in the crease will create one of the best goaltending situations Edmonton has seen in years. Although Scrivens only played with Edmonton for a short while last season, the amount of success he saw in a short period of time was tremendous; Scrivens managed to post  a 3.01 goals-against-average and a .916 save percentage.

It looks like Scrivens will be the Oilers starting goaltender this season, with Fasth playing back up after only seeing seven starts throughout last season.

The Oilers have a lot of potential, but they won’t be able to turn the team around in one season. With the addition of new and more experienced defensemen, Edmonton should be able to improve their record this season, but will still fall short of the playoffs.