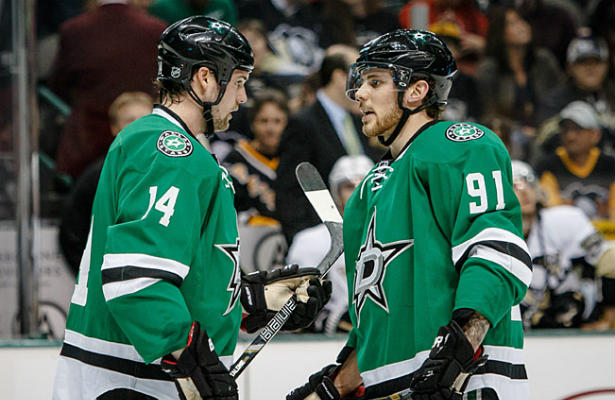 The story behind the Dallars stars the past few years has revolved around management. With a new team brought in for GM duties, the Stars were clearly looking to turn things around. After making the playoffs last season, and providing an exciting atmosphere with fun players to watch, it seems like that turnaround is happening quicker than expected. But what will the Stars look like in 2015, and how far can they make it?

In only a year and a half on the job, Dallas Stars GM Jim Nill has done an outstanding job of rebuilding the Stars team into a contender. It began last year with the acquisition of a potentially character flawed Tyler Seguin. The change of scenery has worked out nicely, as has his new line, forming one of the top tandems in the league last season with Jamie Benn. Using Benn’s incredible size, along with Seguin’s speed and skill, these guys were hard to stop at points during the season.

The benefits showed on the stats sheet too, where Benn collected a career high in goals (34), assists (45) and points (79). He also soared to a plus/minus of +21, besting his career high in that category as well. Seguin was, somehow, even better. He also collected career bests in goals (37), assists (47) and points (84). The scariest part is, these guys are only going to get better. Fortunately for the Stars, the return should be immediate and the Benn/Seguin combination should be more lethal this season.

Nill also pulled off a great trade by acquiring Jason Spezza from Ottawa in exchange for Alex Chaisson. While Spezza is older than Chaisson, at 31 years, he still has plenty left in the tank to contribute to this team. His great work winger Ales Hemsky may return as well. Hemsky managed to pile on 17 points in only 20 games after being traded to Ottawa at least season’s trade deadline. The two could see themselves paired up again this season, giving the Stars quite the one-two punch up front.

These players will also be surrounded by emerging stars such as Valeri Nichushkin, Antoine Roussel, Ryan Garbutt, and Cody Eakin. The veteran presence will be there as well with Erik Cole, Vernon Fiddler and Shawn Horcoff playing a solid role.

Rich Peverly’s name will float around a bit, and we are hopeful for his return to the team. However, with a condition as serious as his, it will take a lot of time for a decision to be made on whether or not he is cleared to be. Remain optimistic Stars fans, but it may take a while.

The defensive unit brought together for 2014-15 will feature a solid group, but not one that jumps out at you as being premier in the league. Alex Goligoski and Trevor Daley will log plenty of minutes on the blue line. Jordie Benn should see additional ice time as he continues to develop, and the same goes for Brenden Dillon.

Sergei Gonchar remains the most veteran defenseman on the team, and could continue to see his minutes reduced. Gonchar, however, will remain a vital piece to the Stars power-play. He contributed 1 goal and 13 assists with the man advantage last season, and signs point to him performing similarly this season.

Kari Lehtonen will be the man between the pipes and maintaining the starting position throughout 2014-15. His numbers were respectable last season with a 2.41 GAA and .919 save percentage, but the Stars would really like to see an improvement in goals against this season. Dallas finished in the middle of the pack in regards to team goals against last season, but an improvement in this area would go a long way in their final standings.

The loss of Tim Thomas in the off-season doesn’t mean much to the Stars. He was brought in at the trade deadline and only played in 8 games. In those 8 appearances, his numbers were less than desirable, leading to a new backup being brought in.

Instead, the Stars looked to Anders Lindback as their back up to Lehtonen. Lindback’s career looked promising during some strong stars back in 2010-11 with the Nashville Predators. He was traded to Tampa Bay in hopes to make an impact there, but not much came of it as there was no improvement in numbers. The Stars are hoping, however, that Lindback can return to great form and become a solid backup seeing roughly 20-25 games.

The Stars managed to squeeze into the playoffs last season, beating out the Coyotes by 2 points for the final spot in the Western Conference. They lost in the first round, but managed to push the top seeded Ducks to six games in the series, and losing three games by only one goal.

With the new acquisitions of Jason Spezza and Ales Hemsky, the Stars look even stronger than they did last season. This additional firepower should help them win a few additional games, and bump them into a higher seed headed into the playoffs in 2015.

Unfortunately, the Western Conference is a monster, and it’s going to take a really strong effort in the post-season to come out on top. A first round match-up could include anyone from the Blackhawks to the Blues to the Kings. And while the Stars have definitely made improvements, I’m not sure they would have what it takes at this point to win the Western Conference.

It will be a good season for the Stars, though, and another solid playoff appearance should be getting fans excited.