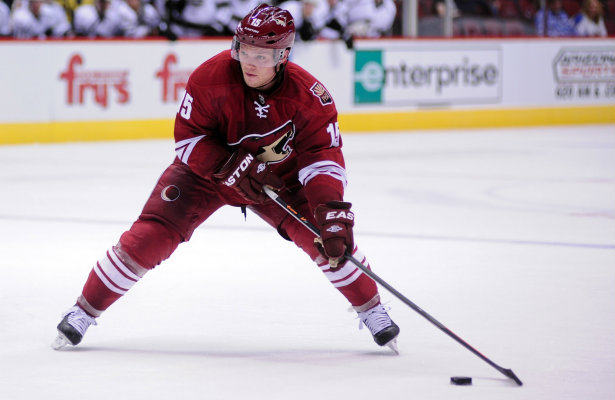 The following is a guest post from Carl Pavlock who has been writing about the Phoenix Coyotes on Five For Howling since 2011.  This will be his first season writing about a team with an owner.  You can also follow him on Twitter @CoyotesDude.

Last year the Coyotes’ fanbase was probably the most excited in the NHL.  Fans finally had a real ownership group and the owners made their presence known by going out and acquiring free agent Mike Ribeiro.  Ribeiro was supposed to give the offense the kick it had been missing since Ray Whitney signed with the Dallas Stars, and everyone expected great things from the team.  Fast forward to a few months ago and the Coyotes barely miss the playoffs and Ribeiro gets bought out for behavioral problems.  This year the Coyotes’ brass decided that a “youth movement” was needed and younger players will be brought up, a process which makes next season very unpredictable.

The Coyotes offense right now remains a giant question mark.  The team lost a lot with the departure of Radim Vrbata and the buyout of Mike Ribeiro and it remains to be seen if they can replace that production from within their system.  Vrbata has been one of the team’s best forwards over the years, and despite his streakiness the Coyotes are going to miss is offensive output; and although buying out Ribeiro was the right decision and he didn’t produce what he should have with the team he had 16 goals and 31 assists that the Coyotes are going to need find somewhere else.

Going into rookie camp the Coyotes have five prospects who are believed to be ready to make the jump to full time NHL players.  Max Domi, Henrik Samuelsson, Lucas Lessio, Tobias Rieder, and Tyler Gaudet are all going to get a good look and have a potential to crack the roster.  All five were successful in the AHL or the OHL last season, however how much of that will translate to the NHL remains to be seen.  Max Domi is likely to make the roster and fill in a top 6 role, however who he will be playing with and whether or not he will be play as a center or wing remains to be seen.

With few exceptions Dave Tippett likes to make tweaks to his lines and with so many prospects expected to make the leap to the big club it’s extremely hard to predict who will be skating with who this next season.  By the end of the season Mikkel Boedker, Shane Doan and Antoine Vermette were skating together fairly regular making it likely to be the only line that won’t receive tweeks from last year.  Boedker had his best season so far, with career highs in goals, assists and points and finishing third in points on the team.  Shane Doan would likely have been the Coyotes top goalscorer last year, which probably doesn’t say much about the Coyotes’ offense, if he had caught Rocky Mountain Spotted Fever.  Antoine Vermette also proved himself to be a valuable center last season.

Besides the prospects that will likely be brought in the other major change for the Coyotes is the trade for Sam Gagner.  Gagner is a replacement for Mike Ribeiro, hopefully without the behavioral problems, and will likely fill in a second line role.  There has been speculation that the Coyotes will move Gagner to the wing, whether or not that happens and what impact it will have on the former first round pick remains to be seen.

If there is one area that the Coyotes are solid this year it’s defense.  Oliver Ekman-Larsson and Zybnek Michalek continue to be one of the most criminally underrated defensive pairings in the NHL while Keith Yandle continues to score tons of points while having a less than desirable plus-minus.  Although the the three most important pieces remain, Derek Morris was not re-signed opening up some space opening up some space for rookies like Brandon Gormely and Connor Murphy to crack the roster.   Gormely is a highly touted prospect who just got caught behind the logjam of defensemen the Coyotes have. Connor Murphy spent some time with the club last year and definitely has a chance to crack the roster, potentially replacing Morris and being paired with Keith Yandle if Tippett feels he’s a better fit than Michael Stone.

It’s extremely likely that the Coyotes will be getting much of their offense from their defenseman again this year.  Last year Keith Yandle led the team in points, and without a splash trade he is likely to be close to top in scoring again this year.  Oliver Ekman-Larsson had career highs in goals, assists, and points last year and hopefully he will continue to improve and contribute next season.

While still failing to reach the numbers he put up when he dragged the Yotes to the Western Conference Finals 2 years ago, Mike Smith was solid after the Olympic break up until he had a player land on his knee knocking him out for the final 10 games.  The Coyotes are still looking for Smith to return to 2011-12 form where he posted a .930 save percentage and 2.21 goals against although we did see flashes of that last season.

With Thomas Greiss heading to Pittsburgh the Coyotes’ will have Devan Dubnyk playing the role of Smith’s backup.  Dubnyk may not be the best option for a starting goaltender in the NHL but he can definitely be a serviceable backup, especially with a team like the Coyotes that tends to overplay their starter.  We’ve also seen Goaltending Coach Sean Burke and the Dave Tippett system work wonders for goaltenders.

It’s difficult to say whether or not the team has improved over last year, mostly because the team still feels unfinished.  The Coyotes will likely look to rookies this year for the first time in a while which could be turn out great or blow up in their faces.  Last season they were 2 points away from 8th in the Western Conference, and even though many of the other teams in the conference and division got better I would say that is a reasonable expectation for them to be fighting for a playoff spot again this year.