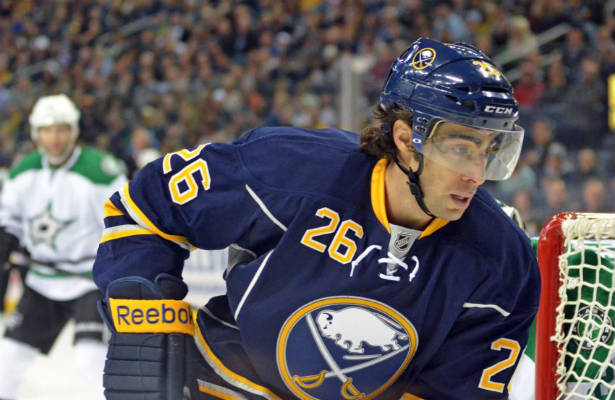 The following is a guest post from Andy Boron who covers the Sabres for, and is managing editor of, DieByTheBlade.com. You can follow him on twitter @andyboron.

Calling the Sabres offense dismal last season would be doing a disservice to dismal offenses everywhere – it was more like a trainwreck. This season, the Sabres won’t light the world on fire offensively, but they also should avoid challenging the Atlanta Thrashers for the fewest goals per game in the modern era as they did last year.

The offensive overhaul begins with the re-signing of Matt Moulson, who brings a legitimate 30-goal threat to Buffalo’s top line. Brian Gionta won’t sniff that number, but his addition will add valuable scoring depth to a team that desperately needs it. The Sabres offense will have significantly more punch to it if #2 overall pick Sam Reinhart spends the whole year in Buffalo, as he can help alleviate the dearth of depth down the middle. Were Reinhart to head back to juniors, it will fall on Tyler Ennis and Zemgus Girgensons to produce while being in over their heads as the team’s #1 and #2 center.

On the wing things aren’t much better, but Drew Stafford, Cody Hodgson, and Chris Stewart will join Moulson on the top two lines. The other forward spots will be filled out with youngsters, grinders, and anyone who’s good at things that aren’t scoring goals.

On the back end, things look much better, and the Sabres defense should be the engine of their team for the next  year or two. Their veterans aren’t much to sneeze at, with Josh Gorges and Andrej Meszaros not-quite-filling the shoes of the departed Christian Ehrhoff and Mike Weber lighting his own jersey on fire every so often, but their young players have the potential to become excellent NHL defensemen the likes of which Sabres fans haven’t seen in Buffalo for many years.

The problem is that nobody knows which of those youngsters will actually play in Buffalo this season, but the front runner is Mark Pysyk, a smooth-skating, calm, crisp second pairing player who has shown very well in his short career. The big question will be whether Rasmus Ristolainen or Nikita Zadorov will stay in the NHL this season, as both are game changers from the blue line with towering size, booming shots, and skating ability like a forward. The answer is a bit more cloudy thanks to the Sabres additions of Josh Gorges and Andrej Meszaros, but the youngsters would make the Sabres back end more exciting, and possibly better, which may work for or against them this year.

The man between the pipes will be the biggest question mark for the Sabres this season. After nearly a decade of penciling “Ryan Miller” in the lineup and calling it a night, the Sabres enter this year with two unproven tenders in Jhonas Enroth and Michal Neuvirth. They’ll need one of those two to grab the reins and prove themselves worthy of a starting position into the future in order to avoid the basement once again.

Unless the Sabres can get excellent goaltending this year, they look to challenge for the #1 pick one more time. However, this year should be much more fun for Sabres fans with low expectations going in, and the promise of a bright future just around the corner.