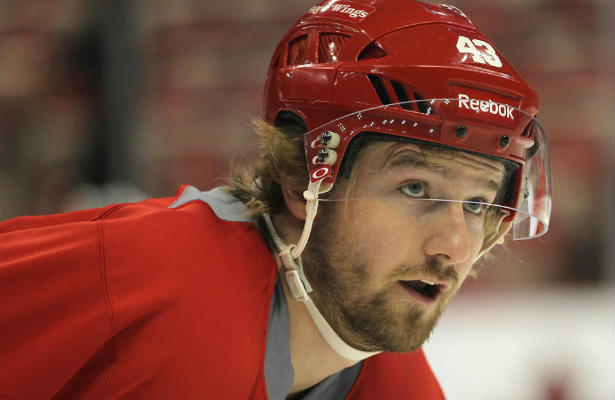 Chances are that as a hockey fan, you might also be a fan of fantasy hockey. With NHL training camps rolling around later this month, it’s not a bad idea to start researching who you might want to take in your upcoming draft. Everyone is going to get their shot at some big name players like Crosby, Stamkos, Kane, the Sedin’s and more. But the fate of your season lies within the depth players, or your sleeper picks throughout the draft.

I’m going to go out on a limb right now and suggest you keep an eye on Darren Helm of the Detroit Red Wings, and look to make him a draft pick before someone else does. Word out of Detroit’s coach Mike Babcock is that Darren Helm will start the season playing on the wing alongside Pavel Datsyuk. This adjustment is due to the Red Wings depth at the center position.

Datsyuk is nothing less than a world class player, and is near a point per game player when he’s healthy. He has the ability to find people all over the ice, and often looks like he has eyes in the back of his head. But finding Helm open on the ice, a player who has exceptional speed, should be even easier for a player like Datsyuk.

Last season, Helm produced 12 goals and 8 assists in only 42 games played. It may not seem like much, but seeing those numbers while playing a depth role isn’t half bad. Being put on a top two scoring line with Datsyuk would only increase his production, and make him more valuable to fantasy owners.

There are two things you will want to keep in mind though. First, Mike Babcock is notorious for shaking up his lines if something isn’t working. It seems like every season going into camp, he says that Datsyuk and Zetterberg will play together, and they are often split apart shortly after starting the season. Helm may be the guy right now heading into camp, but as the season gets underway, that can all change quickly. Second, you’ll want to note that Helm has recently faced a lot of injury issues. He’s heading into the season healthy, but he hasn’t played a full season since 2010-11.

As it stands now, I see more upside with making Helm a late draft pick than downside. Instead of taking a chance on a rookie who might yield little return, opt for Helm and see what he can do.

Good luck to everyone this fantasy season.