Predators Need More to be a Contender 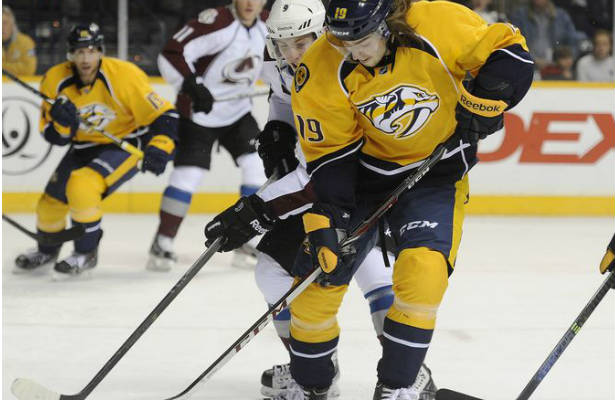 The Nashville Predators have had an active couple weeks prior to the holiday. First, they made a shocking trade with the Pittsburgh Penguins and acquired winger James Neal. This acquisition came shortly after Jason Spezza refused a trade to be dealt to the Preds. Later, they acquired Olli Jokinen to take the place as the teams top center heading into the coming season. The stage was set for this, of course, after dealing away David Legwand at last season’s trade deadline.

Despite a couple of moves, and a coaching adjustment to go along with it, the Predators may have pushed themselves further away from a playoff spot in 2014-15.

One of the best moves for the Predators may have happened late last season when they acquired Calle Jarnkrok from Detroit in the Legwand trade. Jarnkrok had not seen any NHL action with the Red Wings, but immediately made an impact with the Predators by picking up 2 goals and 7 assists in his 12 games played. He also finished with a plus 7 rating. It may not seem like much, but it would translate to just north of 60 points over an entire season if he could maintain that pace. Those numbers would have led the Predators in scoring last season. And while 12 games is a small sample size, it shows some potential from the young (22 years old) and skilled Swede.

The addition of Olli Jokinen is not one to brag about, however. Yes, he fills the desperate need that the Predators had at center, but can actually be seen as a downgrade from David Legwand who the Predators are accustomed to. Legwand is a pretty consistent performer and good for roughly 50 points a season while being defensively responsible. Jokinen, on the other hand, seems to have peaked and is now riding a steady slide down hill as he ages.  Jokinen will be 36 years old during the upcoming season, while Legwand is two years younger.

James Neal may help to rejuvenate the Finnish center, but let’s not get too hyped about it. Neal is certainly a skilled winger, but playing alongside Evgeni Malkin in Pittsburgh didn’t hurt his numbers either. There’s no way Neal puts up the same numbers he did in Pittsburgh if he were playing alongside line mates less talented than Malkin. Plus, let’s not forget that there is a reason behind the Neal trade. With a couple of questionable moves in the past few years, it’s clear that he has some character issues that need clearing up. Those issues may arise again in Nashville and alter his performance.

Perhaps most importantly, let’s not forget that Nashville fired Barry Trotz after last season. He may not have made it anywhere in the playoffs, but it certainly wasn’t for lack of effort. Trotz is easily one of the most underrated coaches in the league. With the players he was given, year after year he was able to turn the Predators into a competitive team. That includes last season, when they fielded a less than tremendous roster but still managed to finish 3 points outside of a playoff spot in the incredibly difficult Western Conference. Those results had a lot to do with Trotz and his coaching staff. You can’t expect the same thing this coming season out of Laviolette.

The Nasvhille Predators are going to learn the hard way that they had a good thing in Trotz. They’re not going to be a failure and finish at the bottom of the standings, Shea Weber and Pekka Rinne will see to that, but it’s going to be a year of adjustments for sure.

Nashville Predators
← Previous Story You Heard It First: The Red Wings Streak Will End
Next Story → Why Toronto Shouldn’t Be Interested in Khabibulin