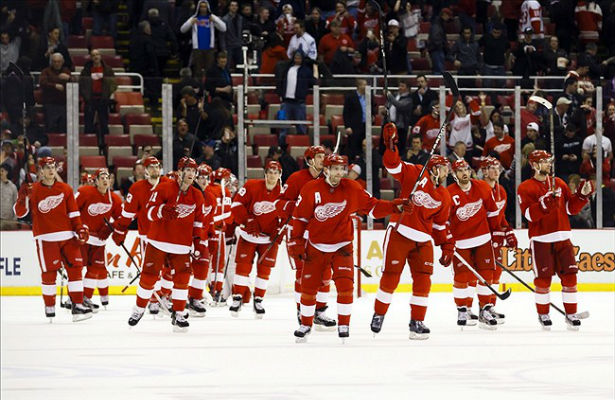 Since winning a Stanley Cup Championship in 2007-08, the Detroit Red Wings have slowly been declining. The following year they lost in the Stanley Cup Finals. The next two seasons saw them lose to the San Jose Sharks in the second round of the playoffs. They have followed that up with three consecutive seasons of early playoff exits, including the past two seasons where they barely made the playoffs. Some will suggest injuries are to blame, but the Red Wings need to make big changes to become on of the top teams in the East for 2014-15.

The biggest thing we noticed out of the Red Wings this past season is how good the “kids” are. Players like Gustav Nyquist, Tomas Tatar, Riley Sheahan, Tomas Jurco, and more, all played well during the 2013-14 season. And while Ken Holland and the Wings have always had a veteran first approach, the fine season that these youngsters put together is the reason why they can stop wasting money on aging talent with little left to offer.

For example, last season the Wings brought back Dan Cleary for another season. On top of that, they $1.75 million to keep him on the roster. Cleary somehow played in 52 games this season, although you wouldn’t have noticed him. He tallied only 4 goals and 4 assists this year, and didn’t manage to make a single playoff appearance – which many could argue was the entire reason he was brought back in the first place.

Let’s also not forget Mikael Samuelsson who was brought back for a second stint with the Wings. He managed 30 games played over the course of two seasons, all the while earning $3 million per season. At $100,000 per game, you would think he could contribute more than 1 goal and 3 assists over those 30 games.

But alas, some contracts have ended and the Red Wings have a chance to be a player again this summer. How should they handle this offseason though?

Let’s start with David Legwand, who was brought in as a trade deadline acquisition to add depth to an injury plagued team. He made absolutely no impact during the playoffs, often seeing time on the third or fourth line. With Stephen Weiss returning healthy next season, Legwand is absolutely expendable.

Mikael Samuelsson, Todd Bertuzzi and Dan Cleary are all free agents this Summer as well. Let them all play elsewhere or retire. The Red Wings became have been vulnerable in the past and made decisions as personal ones, because they are a great organization, but they also need to make business decisions and not renew these contracts.

Use some of their cap space to re-sign restricted free agents such as Tomas Tatar and Riley Sheahan. These were the players that stepped in and played big minutes and big roles when it was absolutely necessary.

On the defensive side of things, let Kyle Quincey become a free agent as well. Let players like Xavier Oullet and Ryan Sproul try to battle for that full time position. We’ve seen how well the young forwards were able to perform being in a similar position, now its time to let the defense get younger as well.

With some of the new cap space they now have available, the Red Wings need to make an incredible pitch for Tomas Vanek. He is THE premier player in free agency this summer, and will be the target acquisition for many. Not only is he a top talent, but his right handed shot would be another positive addition to the team.

If the Vanek signing can’t happen, the Wings need to tread lightly. How much money have they wasted in recent seasons on a player who never should have been signed? Beyond all of the players already mentioned, Jordin Tootoo just adds to the list of wasted funds. There is other talent available, but don’t force something that is never meant to be.

Other players to look at would include Paul Stastny. It’s doubtful he’s going to leave Colorado, but he’s a young and skilled center who might fit in great with the Wings. Mike Cammalleri could be a big goal scoring threat, but he’s coming off of a big contract in Calgary and should not be overpaid like he was before. Ales Hemsky was rumored at times to be headed to Detroit via a trade, but it never happened. He is another option after putting together a solid end to the season in Ottawa, but again, he cannot be over paid.

The Detroit Red Wings are not a top free agent destination like they once were. They have been spurned by the likes of Ryan Suter and Zach Parise not long ago. But this could be their summer to make an effective big signing, and round out a team that, once again, can compete with the best in the NHL.