Alex Galchenyuk: Too Little, Too Soon? 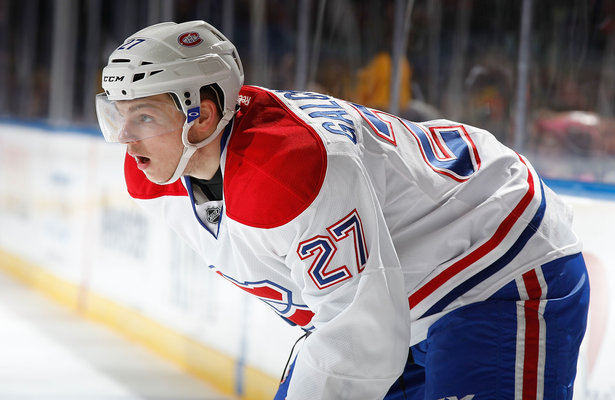 The 2012-2013 season turned out to be a really nice surprise for fans of the Montreal Canadiens. Marc Bergevin was on the heels of taking over as the new general manager and face of a team lacking some identity and accountability. He was ushered in to fix the mess left over by Pierre Gauthier and Bob Gainey. Part of the problem when Gauthier and Gainey were in charge was their lack of trust in the youth that they drafted, simply by not giving more opportunity.

When the shortened season started, he gave way to some youth and surprised many by keeping Alex Galchenyuk up with with the big club. An undeniable talent with hands and vision, Galchenyuk had a decent-to-good season by putting up just over .5 PPG in all 48 games played. He had some success playing with fellow rookie and fan favourite Brendan Gallagher, playing alongside him for a good portion of the season. He ended the regular season with a +/- rating of +14 and a viable nominee for rookie of the year; largely due to the fact that he started many of his shifts in the offensive zone and for the most part, was shielded by new coach Michel Therrien. It’s customary in a league of giants for a coach to protect his young guns so as to not rush the players and allow them to be susceptible to injury. He put up 1 goal and 2 assists in 5 games vs. the Ottawa Senators during the post season and had some signs of not being strong enough yet to endure the physical punishment. Though when all was said and done, it was considered to be a positive rookie year for the native of Milwaukee, WI.

This season hasn’t gone the way he has hoped but that can be expected. He’s missed 14 games because of a hand injury and has struggled to find his cemented place with le bleu-blanc-rouge. He’s spent much of the season jumping back and forth between the natural center position that he’s used to and the left wing side that he hasn’t played too much of in his junior career. Through 62 games, he’s put up just 12 goals and 29 points with a +/- rating of -13.

It’s tough to say whether or not he is deserving of his spot with the team at this early point of his young career, but it’s looking like maybe he was brought in a season or 2 too early given that his numbers have dropped. To be fair, some of the circumstances are out of his control. Learning how to play a position you’ve never really played, in a league much tougher and more demanding than the OHL is a tough task all in it’s own. Skepticism aside, he HAS shown much promise but in a market as volatile and crazy as Montreal is, it’s expected that you figure it out in a hurry and begin to produce almost immediately. Expectations are high on the young phenom but that will happen when you’re picked 3rd overall by the Montreal Canadiens.

Don’t get me wrong he is without a doubt a star in the making, but after some points and a solid argument I ask you, is it too little, too soon?