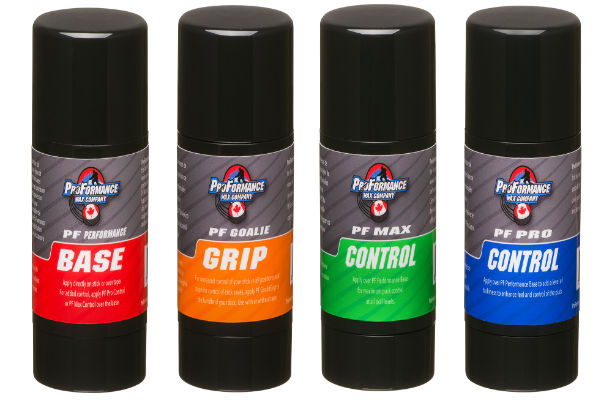 I should preface this review by stating that I had rarely used stick wax in the past. I reviewed the Silverback stick wax, and was pleased with the results, but then stopped using wax again. It just wasn’t convenient to be using, or to be storing.

ProFormance Wax immediately impressed me with their packaging. ProFormance sent us two different sizes of wax to use. First was a small square of wax in a plastic container, appropriately labeled for the type of wax it was. This was very similar to what we were sent by Silverback. But in addition to these small samples, ProFormance sent wax packaged in a deodorant like container. In my opinion, this should be the only way that stick is packaged. The roll on style makes for clean and neat storage, as well as clean application.

The different waxes all smell pretty good, but once your cap is back on the smell dissipates. However, the smaller waxes offered by ProFormance would be able to sit in your bag a bit more exposed and provide a nice smell to help mask that hockey smell.

I’ll just be blunt when I say that I am extremely impressed with ProFormance Wax. From the easy roll on application to the additional grip and preventing snow and ice build up, this wax has earned my trust.

Without any wax on my blade, I found myself with a chunk of ice on my blade by the second or third period of games. Using ProFormance Wax, regardless of which type, eliminated most of this issue. Ice build up, even by the late stages of the third period, was very minimal. This proved to be beneficial just last week in a shootout attempt in which I had no trouble controlling the puck or releasing a quick and accurate snap shot due to the performance of the wax.

What I also liked about the ProFormance wax was the additional grip it was giving me. While using the wax, I found that I had an easier time catching passes, controlling the puck and shooting as well. Part of the solution may have just been eliminating the ice build up, but with the tackiness that the wax provides, I’m going to assume it was doing its job there.

A nice additional benefit that I experienced was having to tape my stick less frequently. I like to leave tape on my stick for a while, but without wax I noticed it would rip and tear pretty quickly. After applying the wax, I probably doubled the amount of time I was able to keep a tape job on my stick before having to replace it.

My application process with the ProFormance Wax has been fairly basic. First, I apply the base layer and then I follow it up with a second layer of the main wax – whether it be Pro Control or Max Control. I noticed that I had trouble distinguishing the differences between the Pro Control and Max Control waxes, but would typically add Max Control as my 2nd layer regardless.

What I liked is that no matter which wax I put on the blade, I was seeing the benefits each and every time I stepped on the ice. There really isn’t anything bad I can say about this product. Coming in at $9.99 for a container, its a small price to pay for wax that will last for a while and provide great benefits.

The ProFormance Wax Company has done an amazing job with all of their waxes and I wouldn’t hesitate to recommend them to a friend or teammate looking for wax. I think they have finally done the trick as well in convincing me to continue to use wax all the time moving forward.

If you’re interested in purchasing ProFormance Wax, head over to their website at proformancewax.com. As I mentioned, each wax container will run you $9.99, so you’re looking at about a $20 investment to pick up the base layer and wax of your choice.

Have you used ProFormance wax before? If so, drop us a note in the comments and tell us about your experiences with it!