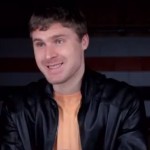 Ilya Bryzgalov hopes to be fit enough to play for Edmonton soon.

Despite the Edmonton Oilers current last place in the NHL standing right now, recent signee Ilya Bryzgalov might be further from putting on an Oilers jersey than we think based on his play last night.

The NHL vet played for the Oilers’ top farm club Oklahoma City Barons last night against Abbotsford and allowed five goals en route to a 5-4 comeback win for the Heat.

Allowing a hat trick to Ben Street over the final 30 minutes of the game didn’t help either with his team letting Street score twice in 25 seconds in the third period.

According to a blog post by Jonathan Willis, he isn’t ready to blame Bryzgalov for every goal but did say he has rust to shake off. Bryzgalov hasn’t played a game since April 25. The Oilers currently have Devan Dubnyk and Jason LaBarbera on the roster, but if the Oilers keep struggling like this they might have to recall Bryzgalov to the big club sooner than he might be physically ready to play at the NHL level.