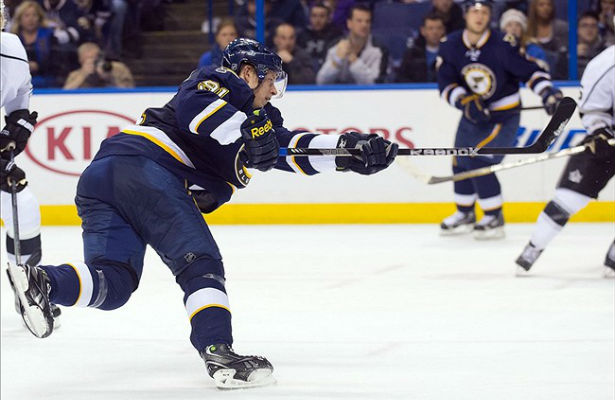 The following is a guest post by Jason McAdams, who covers the St. Louis Blues for the online edition of St. Louis Game Time under the pseudonym “J-Mill.” He’s also, contrary to his tone below, very excited for this upcoming season of Blues hockey. You can follow him on Twitter @JMill1120 – you know, if you want.

You want to know what it’s like to be a St. Louis Blues fan? Here’s what you need to know.

The Flyers. The Islanders. The Oilers. The Flames. The Penguins. The Devils. The Avalanche. The Stars. The Lightning. The Hurricanes. The Ducks. The Kings.

Those are the teams that have existed for less than or equal to the Blues lifespan and have won at least one Stanley Cup. That’s 12 teams. We’ve watched 40% of the NHL figure out how to win in as much or less time as we’ve had – and that’s not counting the so-called “Original Six” teams that have combined for 20 titles in that time. Only Maple Leafs fans have sat on their hands for as long as we have, but at least they still have their 13 old school Cups to hang their hats on. All we have in St. Louis is a President’s Trophy with an Owen Nolan-shaped dent in it (one oddly similar to the exclamation point Dustin Penner put on last year’s Blues season) and residual checks from being background extras in two of the NHL’s most famous (and most played) commercials.

So pardon me if I show a little skepticism over some people picking the Blues to win the 2014 Stanley Cup.

Not to say the current Blues roster isn’t more than capable of breaking that unlucky streak. Far from it, in fact. We’ve just been jaded by equally talented teams that have fallen short of The Prize (usually well short). But this year is going to be different! Right? (…right?)

Let’s find out why:

The key-est of these is Roy. He’s had a couple rocky season, but if he can regain his production from Buffalo (highlighted by 81 points in 78 games in 2007-08), he could be the X-factor in taking a great defensive team with scoring issues and turning them into a truly balanced contender. He’ll likely start out on the second line, but he could end up pushing David Backes back to his natural right wing and centering the first.

Paajarvi is a bit of a project piece, mainly joining the team because he’s cheaper than David Perron (more on that in a second). He’s still only 22 and has the skill set to become a decent top-6 winger, but unless another forward falls into a slump or lands on the DL, any major production out of him this year will be gravy.

Maxim Lapierre personifies every negative stereotype that fans of other teams have of the Blues. He’ll be a great addition on the energy line, and will probably become a fan favorite.

Brenden Morrow, just added on Monday for the relative bargain of 1 year/$1.5 million, is a peculiar move. On the one hand, adding a veteran, Cup-winning, former captain who averaged nearly a point-per-game on his last team (albeit in only 16 games) is never a bad move. On the other hand, it over crowds an already crowded group of 2nd and 3rd line forwards. In my ideal world, he’ll play on the wing of a very good 4th line along with Lapierre and Vladimir Sobotka. But considering his past relationship with coach Hitchcock, it’s much more likely that he’ll receive top-9 minutes, taking playing time away from either Vladimir Tarasenko, Paajarvi, or Jaden Schwartz, and be using up the last of the available cap space to do it. That said, if he provides the veteran leadership and post-season know-how that Jason Arnott and Jamie Langenbrunner brought to the 2011-12 squad, he’ll be helpful.

Perron is a very skilled winger still with point-per-game potential, but his time in St. Louis was plagued with inconsistent play, misunderstood behavior, and just shy of 100 games lost to a concussion that some “legitimate” media members accused him of faking. (Fun fact: 100% of those people also believe 9/11 was an inside job. Probably.) He also seemed to be a pretty efficient penalty machine in the offensive zone last year. All of that, the emergence of other options up front, plus his $3.8 million cap hit made him expendable this summer in a deal that ultimately benefited both all parties.

Andy McDonald, when healthy, was an offensive game changer for the Blues, but he ultimately decided that memory retention and the ability to see straight were more important than the 45-60 games he’d get to play in each year.

Forwards: The group upfront is led by American Hero David Backes, who is so good, he was a Selke nominee in 2012 while playing center, despite being a natural right winger. He’s coming off a disappointing season with only 6 goals, but he’s broken 30 multiple times and plays as solid a two-way game as anyone in the league. Beyond him, for better or worse, the Blues forward group is defined by several guys with strong two-way skills, but with a 2nd line offensive ceiling, such as Alexander Steen and T.J. Oshie – the type of guys who won’t break a game open, but that you need to have a Cup-winning team. Chris Stewart has 35-40 goal potential as a power forward, and he led the team last season with 18 goals in 48 games, but his shooting % of 18.6 was a bit on the unsustainable end of the spectrum – although boy would I love to be proven wrong on him!

The big X-factor, other than the aforementioned Derek Roy, is 2nd year Russian winger Vladimir Tarasenko. His rookie season started white hot with 2 beautiful goals against Detroit on opening night, but he suffered a concussion half-way through the season costing him 10 games. He finished the season with only 8 goals and 11 assists, and he was a healthy scratch in 5 of the 6 games in the playoffs and against LA. The Tank has all the skill and potential to break-out to become that go-to goal scorer, and should he do so this season, this team could go from a possible contender to the short list of favorites.

Defense: As a team, the Blues only allowed 24.1 shots against per game, 2nd only to New Jersey. That’s the name of the game under Ken Hitchcock: suffocation.

Now that Alex Pietrangelo has been signed to a long term deal (you’re welcome), he’ll be all set to headline what could (due respect to the Bruins) very well be the best and deepest blueline corps in North America. Petro is only 22 years old and is already a Norris Trophy-quality defenseman. He’ll be likely be paired up with possible Team Canada teammate Jay Bouwmeester or assured Team USA player Kevin Shattenkirk. All three are among the better puck-moving defensemen in the Western Conference and will be expected to produce well on the power play as well. Add onto that Jordan Leopold, and a Barret Jackman/Roman Polak duo that might be the best 3rd pairing in the league (certainly will be the toughest), and you have about as deep of a blueline as you’re going to find outside of the Olympics.

And if injuries take their toll, either Notre Dame alum Ian Cole or possibly even former Olympian Ryan Whitney fills in as the 7th d-man.

Goaltending: Here’s where it starts to get interesting, though not quite as much so as some would have you believe. Two years ago, the netminding duo of Jaroslav Halak and Brian Elliott dominated all who opposed them. As a team, the Blues allowed only 165 goals all year (only 1 above the 82-game record), both had a GAA of less than 2 (1.97 and 1.56, respectively), and Elliott’s .940 save % set a then NHL record (which was, believe it or not, broken last season by Craig Anderson’s .941). In 2013, however, Elliott had early struggles, while Jaro had injury troubles. A bright spot was the emergence of Jake Allen, who posted a 9-4 record with a 2.46 GAA in emergency fill-in duties. Despite all of that, the Blues still only gave up 115 goals through the 48 game season, tied for 2nd best in the league.

The big question mark going into this season is if Halak and/or Elliott can recapture their Jennings Trophy-winning form and consistency they had in 2011-12. And more importantly, can one of step up and be The Guy come postseason time? Elliott wasn’t bad against the Kings last year, but in such an epically tight series where only about 2:00 of game time saw either team with a lead of more than one goal, every minute mistake was magnified. In the 2012 playoffs, both were quite good until their respective injuries (Halak got concussed against the Sharks and Ells acquired some sort of inner-ear imbalance), but with both in contract years, the time for excuses will definitely be over come April. If either falters in the regular season, Jake Allen is more than a capable replacement, but is hardly the answer this season. If neither can find their zone come February, don’t be surprised if some Ryan Miller-to-the-Blues rumors start taking hold (although do be shocked if it actually happens).

Predictions: In the new Norris – I mean Central – division, the Blues look to be the easy choice for the 2nd of 3 guaranteed playoff births. That’s not what this team will be judged on, however. Just like everyone else in the league, the measuring stick for the Blue Note is their rivals up I-55 – the Chicago Blackhawks. In 5 meetings last year, the Blues only managed 2 wins – one by shootout, the other essentially over the Rockford Icehogs on the eve of the postseason. With division playoffs making a comeback this season, St. Louis’ path to their first Stanley Cup must go through the Chicago.

The Blues will once again be one of the best defensive teams in the league, with Halak and/or Elliott returning to form. If Tarasenko, Stewart, and Derek Roy breakout, they’ll be challenging the Hawks and whomever else for the President’s Trophy, but worst case will still wrap up the 2nd seed in the Central.

Then we’ll somehow run into the Los Angeles Kings again and get swept out of the playoffs yet again. Because we’re the Blues.

But I pray in the names of Hullie, Federko, and The Plagers Three: please prove me wrong. Just. One. Time.