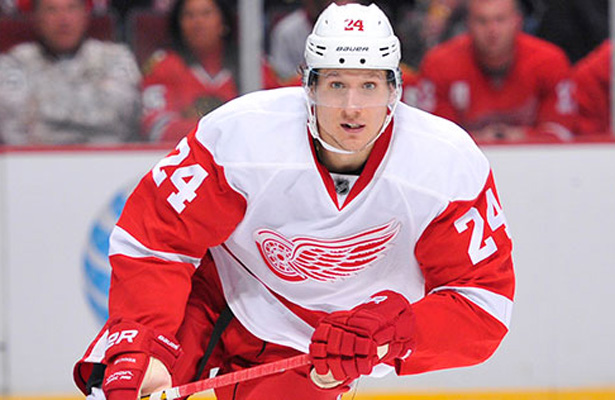 One of the more enigmatic free agents still remaining this summer is former Detroit Red Wings forward Damien Brunner, who played out a one-year deal with the team during last season’s lockout shortened schedule.

The 27-year-old Brunner came into the NHL as a Swiss phenom, scoring 24 goals and 60 points in 45 games for EV Zug of the Swiss League in 2011-12. During the lockout, he rejoined his team and tallied 25 goals and 57 points in just 33 games. Still, it was uncertain how Brunner would adjust to the North American style of play.

When he finally joined the Wings, he had a pretty productive season for a rookie, scoring 12 goals and 14 assists in 44 games. But Brunner really stepped up his game in the playoffs, tying Pavel Datsyuk with nine points in 14 games, which included five goals for Brunner. Henrik Zetterberg led the team with 12 points in 14 games.

Fast forward to free agency where Brunner and the Wings failed to come to an agreement on terms for a contract. It was reported that Brunner was seeking around $3.5 million per season, which the Wings weren’t willing to pay to a player who doesn’t have the experience and hasn’t really proven his worth in the NHL. That type of money would be a steal if Brunner ends up being a consistent 25-goal, 60-point scorer. But, if Brunner ends up being a career 40-point guy, the Wings would not want to dedicate that type of money to him.

Evidently nobody else wants to, either, which is why Brunner remains unsigned to this day.

After Kovalchuk left for the KHL, there was talk that the Devils might pursue Brunner. However, there are rumors stating that the Devils may use their newly found cap space to lure in Jaromir Jagr. The Carolina Hurricanes, who were previously in on Jagr as well, could opt to go to Brunner instead.

The New York Islanders have roughly $15.6 million in available cap space still. Looking to improve on their playoff appearance last season, Brunner could provide scoring depth for the team on the wing.

The same could prove to be true for the Nashville Predators, who have approximately $6.1 million available in cap space. Brunner could help boost the offensive output from their top six.

And don’t forget about the Wings, who cold still sign Brunner if his asking price comes down. They obviously liked what they saw last season, but are unwilling to commit a large amount to him at this time. Plus, the team would likely have to make some trades in order to free up cap space to sign Brunner and Dan Cleary, who has reportedly agreed to terms with the Wings but can’t officially sign until cap space has been cleared.

Still, teams remain hesitant to throw money at Brunner, an unproven player in the NHL. It’s likely he could get another one-year deal, and will probably have to settle for less than the $3.5 million he’s currently seeking. Ideally, this will likely be the route that Brunner has to pursue. If he has another successful season, he could be in for a large pay raise next summer as a UFA.

It would be similar to Alexander Semin last summer, who is a talented player but had a lot of speculation surrounding him regarding his attitude and work ethic. Carolina took a chance on Semin, liked what they saw evidently, and awarded him a five-year contract extension.

With only 44 games of NHL experience, Brunner may just need to wait his turn and, in the meantime, show teams that he has the skills and ability to play in the NHL.