It’s about two months before hockey fans start plotting out their fantasy draft lists, but before you figure out who to draft in the middle rounds be advised of players who won’t be ready to start the season. 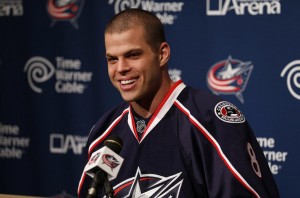 Getting Nathan Horton as a free agent was a value additon for Columbus. If he’s healthy, he could contribute as one of the teams leading scorers. Photo Credit: Columbus Blue Jackets

One such player is Nathan Horton of Columbus. The former Boston Bruins forward underwent shoulder surgery Wednesday to repair a shoulder injury he received during the 2013 Stanley Cup Final. The procedure was performed by Dr. Jon Warner at the Boston Shoulder Institute at Massachusetts General Hospital in Boston.

The Blue Jackets was well aware Horton needed surgery on his shoulder then they signed him to a seven-year, $37.1 million contract with the Blue Jackets on July 5. As for a time table for his recovery, Horton said he was told the recovery time is four-to-six months.

“Since Nathan joined the Blue Jackets, our medical team from OhioHealth and team training staff have worked closely with Dr. Warner and will be actively engaged with Nathan throughout the rehabilitation process,” Blue Jackets general manager Jarmo Kekalainen said.

During his three seasons in Boston, Horton has seen decreased production on offense. He played 80 regular season games in 2010-11 where he scored 26 goals to go along with 27 assists. But it was during the 2011 playoffs where he suffered a concussion during Game 3 against Vancouver. The hit dished by Aaron Rome was widely considered to be a turning point in the series as Boston came back by scoring 21 of the next 25 goals between the Bruins and Canucks.

He would suffer his second concussion in less than a year when Tom Sistito checked him on January 22, 2012. He missed the rest of the season and made his return to the ice almost a calendar-year later on opening night after the lockout last fall. If there was anyone who benefited from the lockout, it was Horton as he was able to take his time to recover from his second concussion in seven months.

Before you step up to the draft board in a couple months, keep a list of what players will be injured at the start of the season. Some you might want to pick up on the waiver wire after the draft. Others like Horton, could slip down a few rounds if you’re willing to start him on IR until he returns. He could be back as early as November and as late as mid-January.