With the 2013 NHL Entry Draft set to take place in New Jersey this weekend, there is still a lot of speculation about who the Colorado Avalanche will select with the number one overall pick. However, after several weeks of leaning toward selecting defenseman Seth Jones first overall, the team appears to be changing their tune somewhat to the idea of taking forward Nathan MacKinnon instead.

Avalanche executive vice president of hockey operations Joe Sakic stated recently that Nathan MacKinnon would be their top selection “if we had to do it today, right now.” 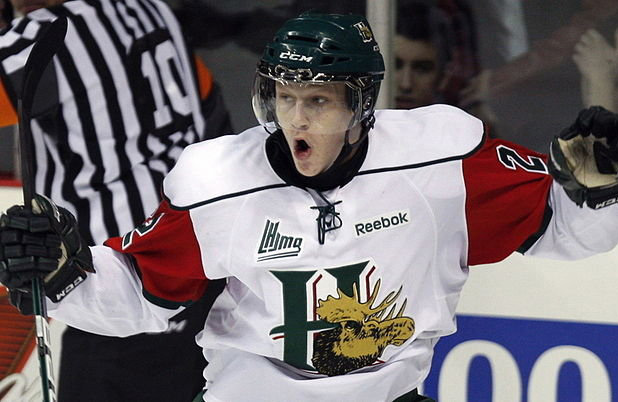 Rick Pracey, director of amateur scouting for Colorado, reiterated those comments today, indicating that the team is leaning toward taking a forward with their pick, and MacKinnon remains the frontrunner.

“If you look even recently at the top five scorers in terms of point production in the League, all of the top five were first-overall picks,” said Pracey. “If you look at the past five years in the top-20 scoring, a good percentage of them were top-five picks in the draft.”

MacKinnon was an offensive powerhouse in juniors and on the international stage, and widely considered by scouts to be the most NHL-ready player in the draft. However, with so many young forwards already on the roster, such as Matt Duchene, Paul Stastny, Ryan O’Reilly and Gabriel Landeskog, the logical choice would seem to be a defenseman to help shore up the team’s defensive needs. After all, Colorado finished 27th in the league in goals against per game with a 3.12 average.

However, even with many of those budding young superstars, the team didn’t fair much better on offense, finishing 26th in the league with a 2.38 goals scored per game average. MacKinnon could certainly help boost those offensive numbers.

“We think it’s a special day for our franchise,” said Pracey. “We see this as an opportunity to add a potential core player, a building block for the next 15 years, a player who is NHL-ready.”

Despite recent comments, however, the team isn’t willing to fully divulge their game-plan for draft day. In fact, they still see a lot of value in Jones and will be forced to make a tough decision between him and MacKinnon.

“Seth Jones is a very, very good player. He has good size, elite skating ability, he can move the puck. He’s going to be a very good player in this League and we still have a high amount of interest in him,” said Pracey.

The last defenseman to be taken first overall was Erik Johnson in 2006 by the St. Louis Blues. Johnson was traded to the Avalanche several years ago and it’s widely considered that Johnson has yet to live up to expectations.

“I think it’s the nature of the position and the responsibilities that go with it,” Pracey said. “The development curve, the adjustment to the League in terms of size … another argument is their ability to handle big men.”