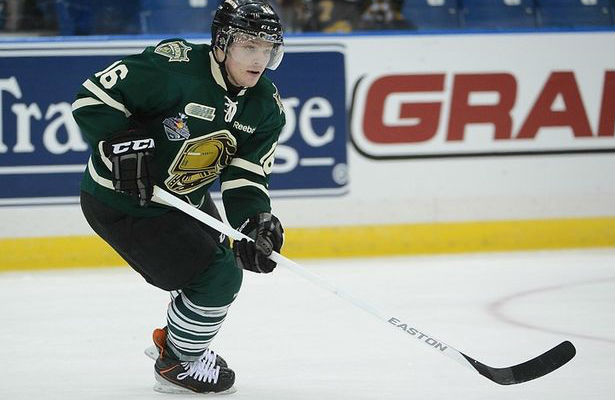 Easton seems to be taking a page out of the Reebok/CCM book by signing an OHL prospect to an endorsement deal before he has even been drafted. The concept has worked well for both Reebok and CCM, and Easton is hoping to see similar results with their signing.

Max Domi, the London Knights star who was signed by Easton, is currently preparing himself for the 2013 NHL Draft. His draft stock is high, and despite his size, the youngster will likely be chosen in the first round.

Domi will represent the Easton brand on and off the ice, and will specifically be the face of the Easton Mako skates. Domi has been in these skates for some time now, and clearly has been impressed with what they have to offer.

For additional information, check out the full press release from Easton Hockey below. Be sure to leave us your thoughts about this signing in the comments.

VAN NUYS, Calif. (June 20, 2013) – Max Domi, one of the leaders of the OHL and expected NHL first-round Draft pick, will endorse Easton Hockey gear as part of a multi-year partnership contract.

Known for his speed and passionate playing style, Domi’s offensive skills played a large part in helping the London Knights set records for consecutive wins leading to finishing first overall in the OHL this season.

Domi, who was an early adopter of Easton’s new Mako skates, has dubbed himself the “Mako Kid.” As an elite skater who prides himself on acceleration and quick changes of pace, Domi’s shiftiness, edgework and agility have set him apart from other prospects.

“Max Domi has very bright career ahead of him. His skill level and exemplary hard work combined with his goal scoring, sets him apart,” said Matt Arndt, Executive Vice President and General Manager of Easton Hockey. “He shows that he has an unstoppable future, and one we are very proud to be a part of. We look forward to watching his NHL career and are confident he will become an NHL star.”

As an Easton Hockey endorsee, Domi will continue to use and market Easton Hockey gear, as well as participate in upcoming campaigns and product launches. The Ontario native will also be involved in the development of future Easton designs.

“Starting a partnership with Easton is truly humbling and an honor,” said Domi. “Easton is always the technology leader in sticks and skates – the two main tools for a hockey player. What I noticed most about the Makos is they help you get in the right skating position and in the most comfortable natural way.”

Terms of the multi-year deal, which was brokered by CAA Sports, who represents Domi, were not disclosed.